The Death of Ginger Goodwin 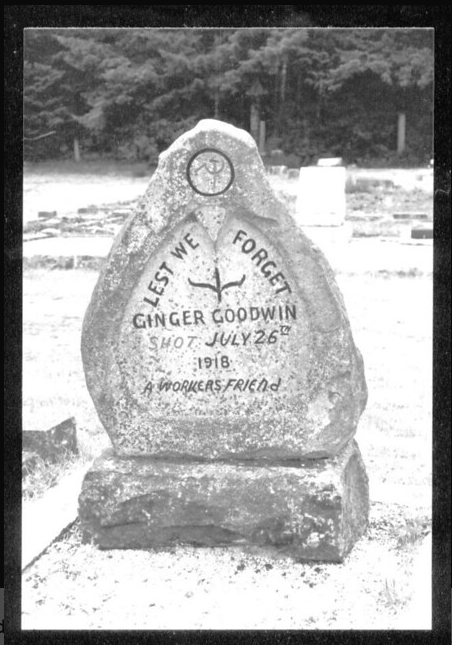 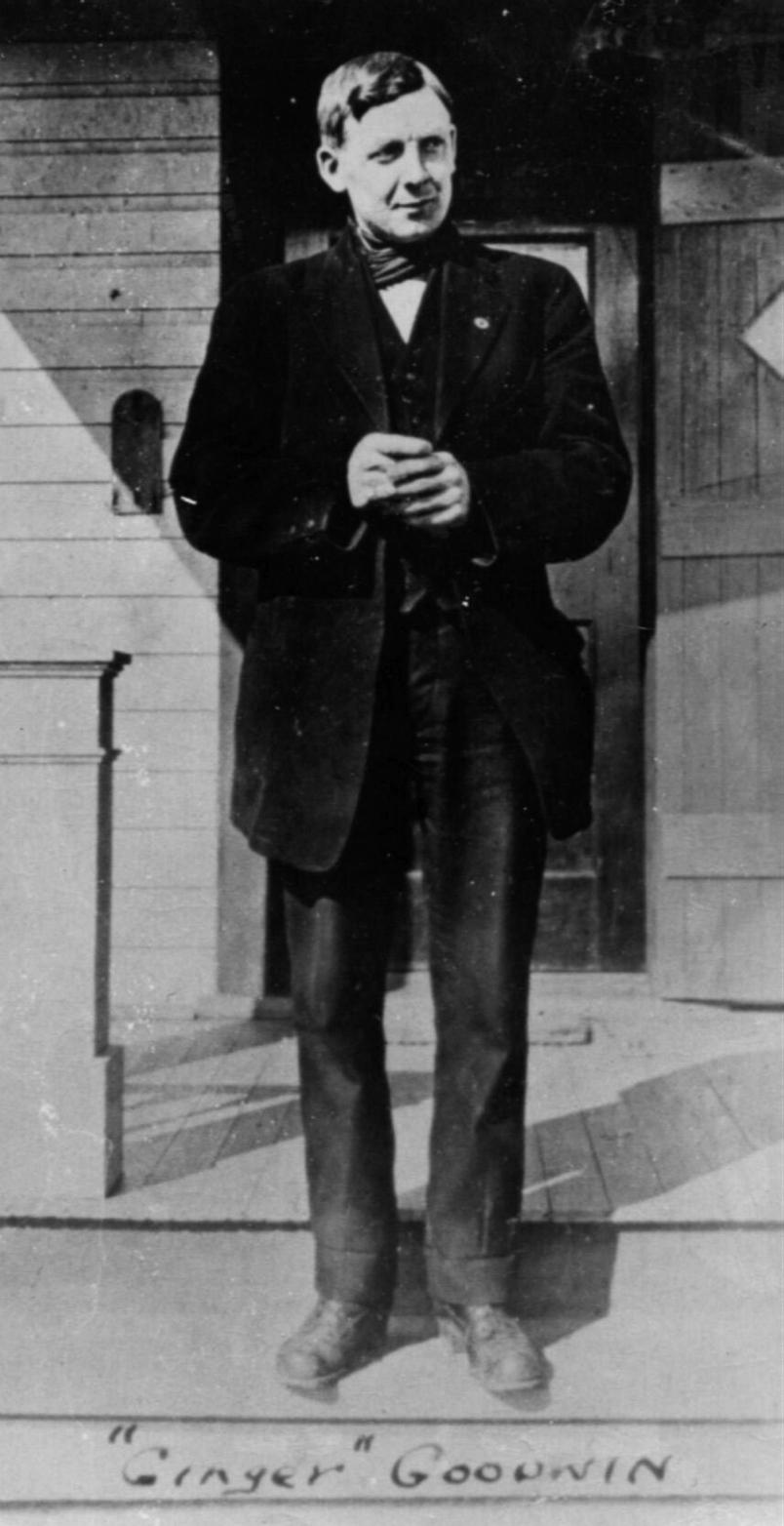 Ginger Goodwin, shown here in an undated photo, was a dedicated member of the Socialist Party of Canada. 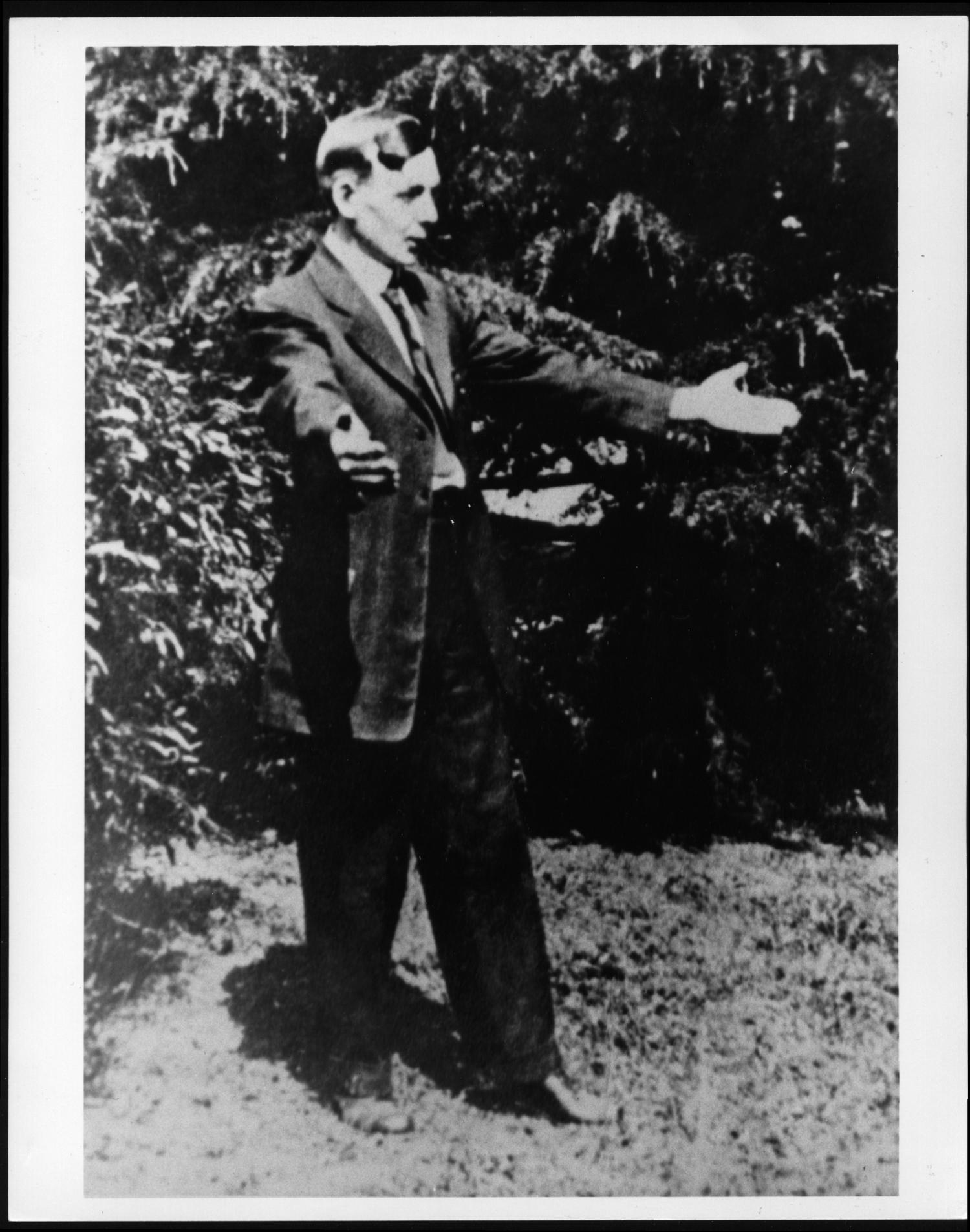 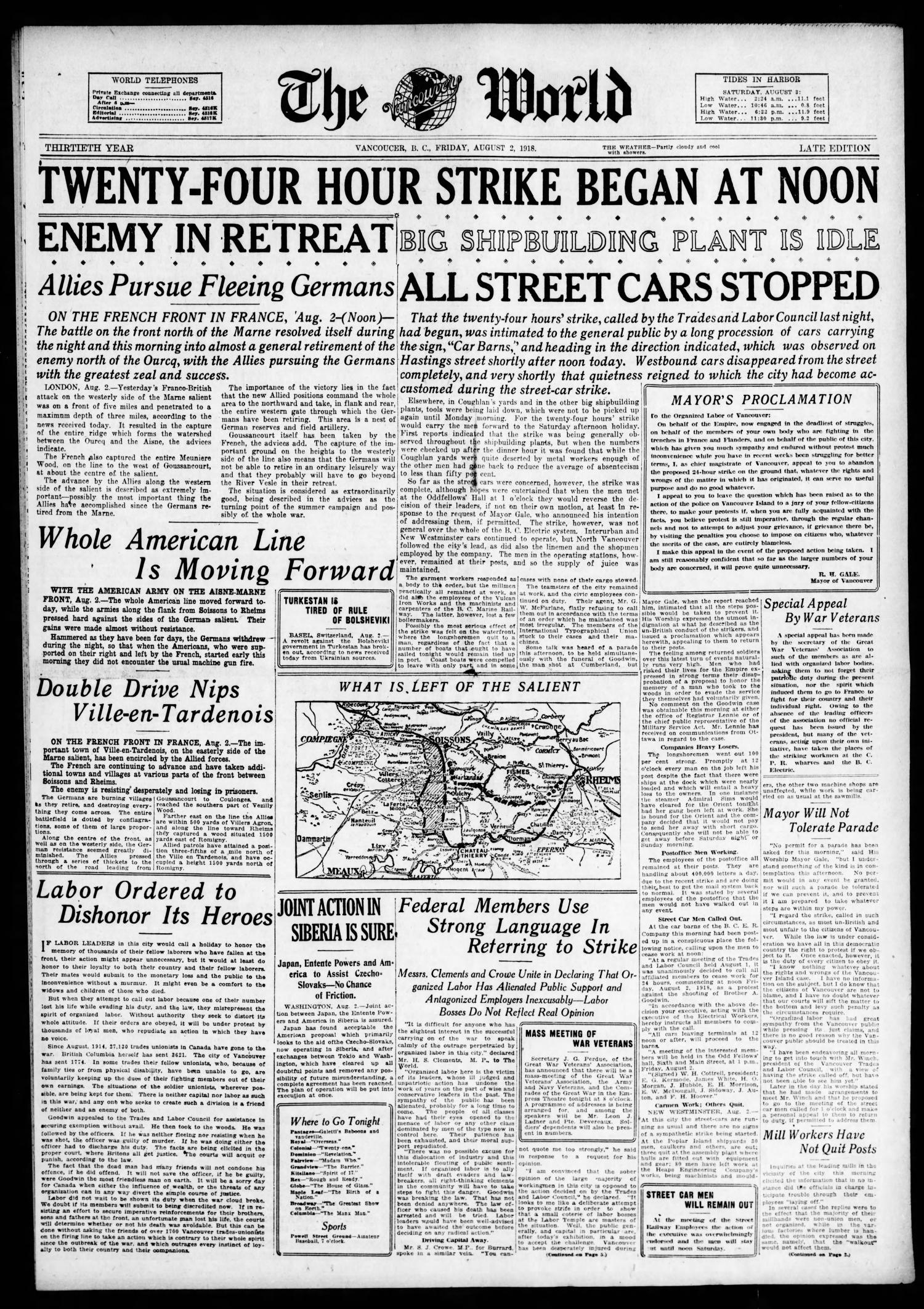 The Vancouver World’s front page coverage of the general strike on Aug. 2, 1918. The next day, a headline in the same paper read, “Strike Order Causes Tense Situation in City: Near Riot Develops When Street Cars Go to Barns.” 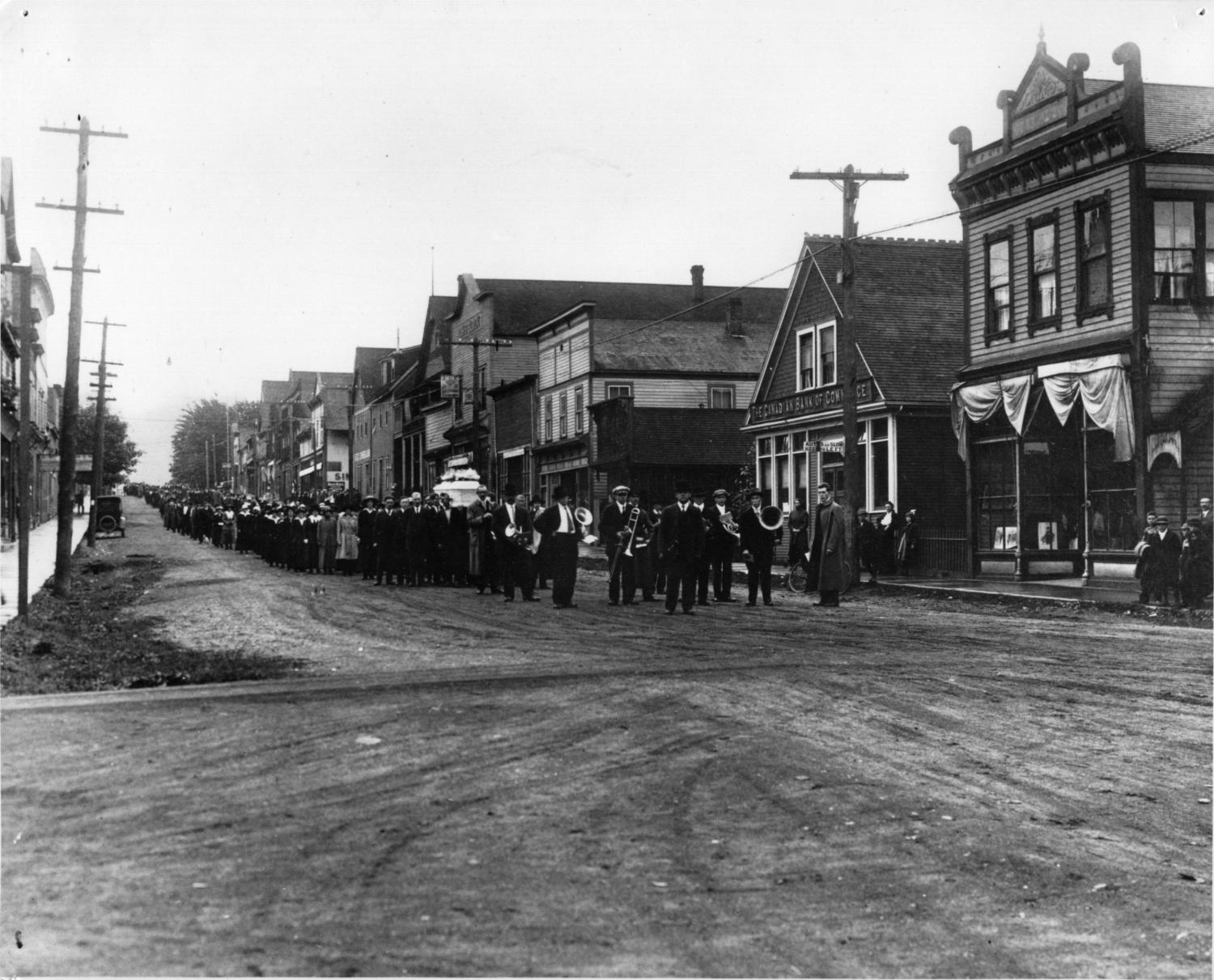 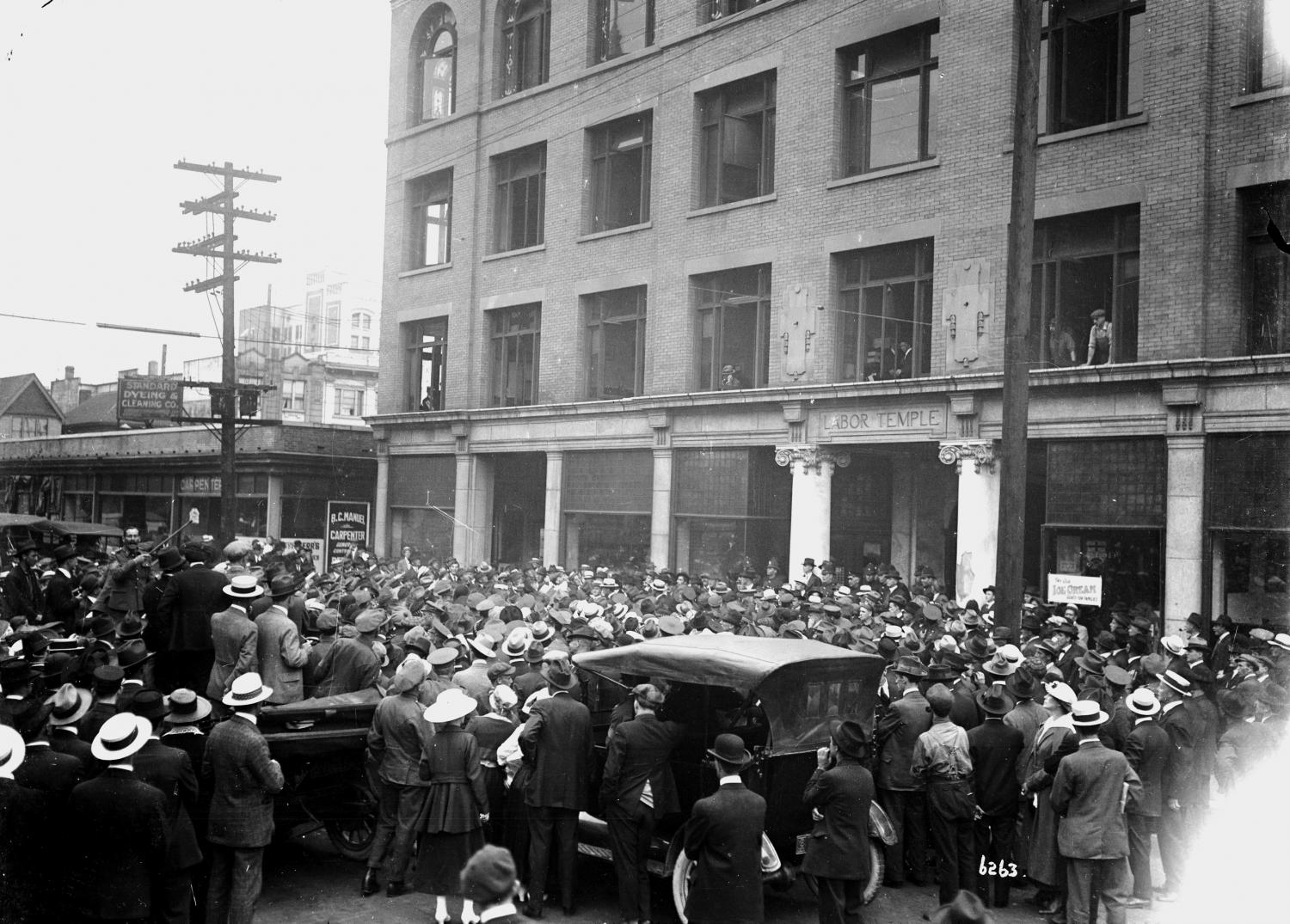 Ginger Goodwin, shown here in an undated photo, was a dedicated member of the Socialist Party of Canada.

The Vancouver World’s front page coverage of the general strike on Aug. 2, 1918. The next day, a headline in the same paper read, “Strike Order Causes Tense Situation in City: Near Riot Develops When Street Cars Go to Barns.”

As the First World War was winding down in the summer of 1918, another battle was brewing in British Columbia. Ironically, one cause of this new unrest was the end of the war itself. For all the costs of combat, military conflict brings with it a demand for material goods. Peace, in turn, meant not only an influx of men returning home but decreased demand for production. Unemployment was rapidly on the rise.

The Vancouver labour movement had been against the war from the start. Workers from all sectors had struck against inflation, as well as food shortages and other restrictive measures Canada’s wartime government had put in place. They also saw conscription as a potential first step towards the loss of workers’ autonomy.

And then Ginger Goodwin was killed.

Originally from England, Albert “Ginger” Goodwin came to Canada before World War I and found work as a miner. Working in Cumberland on Vancouver Island and later Trail in the Interior, Goodwin quickly became an outspoken union activist and labour organizer. While a vocal critic of the war, he still signed up to fight. However, long hours in the mines had left him with black lung, and he was deemed temporarily “unfit” for overseas combat.

In 1917, Goodwin became the vice president of the B.C. Federation of Labour. That November in Trail, he led mill and smelter workers in a strike for the eight-hour workday. But less than two weeks into the strike, Goodwin was called for a reexamination of his military deferment, and his status was suddenly changed. The government had now marked him “fit for duty.” Attempting to evade authorities, Goodwin fled to Cumberland and hid for months in the surrounding woods. But on July 27, 1918, Goodwin was shot and killed by Const. Dan Campbell. Campbell claimed he shot in self-defence, but few among the working class bought his story.

Goodwin’s funeral procession was held on Aug. 2. With a couple of thousand people, it stretched over a mile long. Labour leaders in Vancouver declared the day a 24-hour strike and called for unionized workers all across B.C. to take part. Miners, metal workers, and streetcar drivers all walked off their jobs, driving the province to a halt. “The time for talking was past,” said Victor Midgley, council secretary for the Vancouver Trades and Labour Council. This was the first general strike in Canadian history.

Meanwhile, newly-returned veterans — many of whom were now jobless — watched in frustration. Goodwin was a draft dodger, after all. They saw socialism as a “Bolshevik” threat and were angry at how many foreigners — namely, Eastern and Southern Europeans — had taken their jobs. Their discontent was further stoked by rumours the Canadian Manufacturing Association and the Vancouver Board of Trade spread that painted striking unionists as “pro-German and anti-patriot.” The vets stormed the offices of the Vancouver Trades and Labour Council, also known as the Labour Temple, in an alcohol-fueled rage. They hurled books and records out the office’s windows. They even tried to throw Midgley from an upper-floor window, but he caught a ledge and climbed back in. The soldiers then beat him and other organization members on the street, calling them names and forcing them to kiss the Union Jack.

By midnight of Aug. 3, the strike had ended. While lasting only one day, it had drawn the attention of labour organizers across Canada, many of whom would take part in the Winnipeg General Strike the following year, one of the most famous and influential strikes in Canadian history. The frustration of the strike also marked a shift for the B.C. trade union movement, and Vancouver workers in particular, who resented the growing economic injustice that had stemmed from unbridled capitalism.

As for Ginger Goodwin, he remains one of the most well-known labour activists in the country’s history.

3. Mickleburgh, Rod. On the Line: a History of the British Columbia Labour Movement. Harbour Publishing, 2018.