Women in the War

B.C. women go to work, at home and overseas 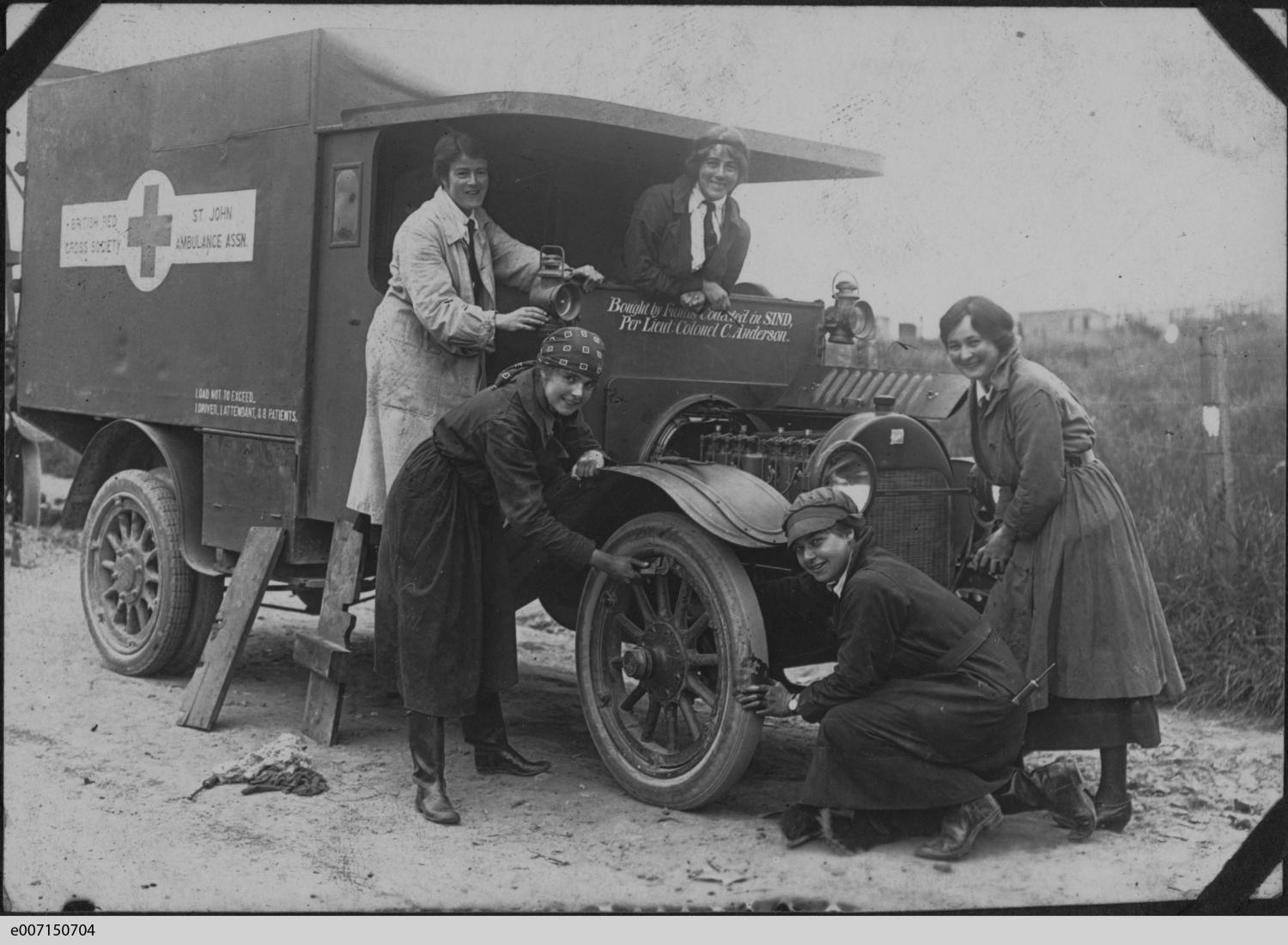 Ambulance drivers working on a vehicle in France, 1917. The funeral for nurse Gladys Wake from Victoria, who was one of 2,500 Canadian women who served overseas. She was killed in action in Étaples, France in May 1918.

Ambulance drivers working on a vehicle in France, 1917.

The funeral for nurse Gladys Wake from Victoria, who was one of 2,500 Canadian women who served overseas. She was killed in action in Étaples, France in May 1918.

As the battlefields of the Great War beckoned, men across Canada took their leave to fight for Britain. Their absence was not only felt by loved ones; a diminished workforce on the homefront hurt businesses. Despite any initial reluctance, companies had to turn to an unprecedented source: women.

Even before the war had started, women had begun venturing out of their domestic spheres into public life. Many had become passionately engaged in universal suffrage, improved healthcare for women and children, and temperance. Clubs and societies centred around moral reform had peaked in popularity, with memberships made up of middle and upper-class white women. Now, these groups had found a new cause: supporting the war effort. They fundraised for hospitals and ambulances, prepared and conserved food, sewed hospital shirts and caps, and assembled care packages for soldiers in Europe. Many women also joined larger charitable organizations like the Red Cross.

Meanwhile, intense demand for labour was emerging across Canada. The introduction of conscription in 1917 would only compound the country’s lack of workers, leaving businesses with no choice. Jobs once considered the exclusive domain of men were now open to women. With support from the federal government, which launched a series of poster campaigns and recruitment drives, women found jobs driving buses and streetcars and working in banks and police departments. A staggering 30,000 Canadian women found work in the so-called war industries, such as munitions manufacturing.

But women weren’t only doing civilian work. Over 2,500 women joined the war effort as nurses, one of the only military roles they could take up at the time, in addition to ambulance drivers. Most were young. They came from hospitals in British Columbia like Royal Jubilee and Vancouver General. At Macaulay Point Camp in Victoria, they learned how to march and treat war-specific injuries before heading overseas as newly-appointed lieutenants with the power to issue commands to wounded soldiers.

Like the troops they treated, danger was an ever-present reality for nurses. Air raids and other violence claimed the lives of many women, their graves scattered across England, France, Egypt, Greece and South Africa, providing testament to their sacrifice. For some, there would be no burial. Dozens of floating hospitals and vessels carrying wounded soldiers and medical supplies were torpedoed as they crossed the Atlantic.

The contribution of women both on the front and at home challenged the rigid norms of the day. At the time, these inclusive measures were considered only temporary, rendering them palatable to a society that was still heavily segregated by gender. But by 1917, a year before the war’s end, white women in B.C. had won the right to vote. It was a momentous achievement, considering the decades of campaigns pushing for universal suffrage. It would serve as an overdue thank you from a grateful country.

As one soldier stationed in France wrote in the Ladysmith Chronicle newspaper: “When the history of this war is recorded, it will be found that the victory was in no small manner due to the noble efforts put forth in a thousand and one different ways by the women.”

5. Reyburn, Karen Ann. Blurring the Boundaries: Images of Women in Canadian Propoganda of World War I. University of Guelph, Sept. 1998.