The Birth of Kitimat 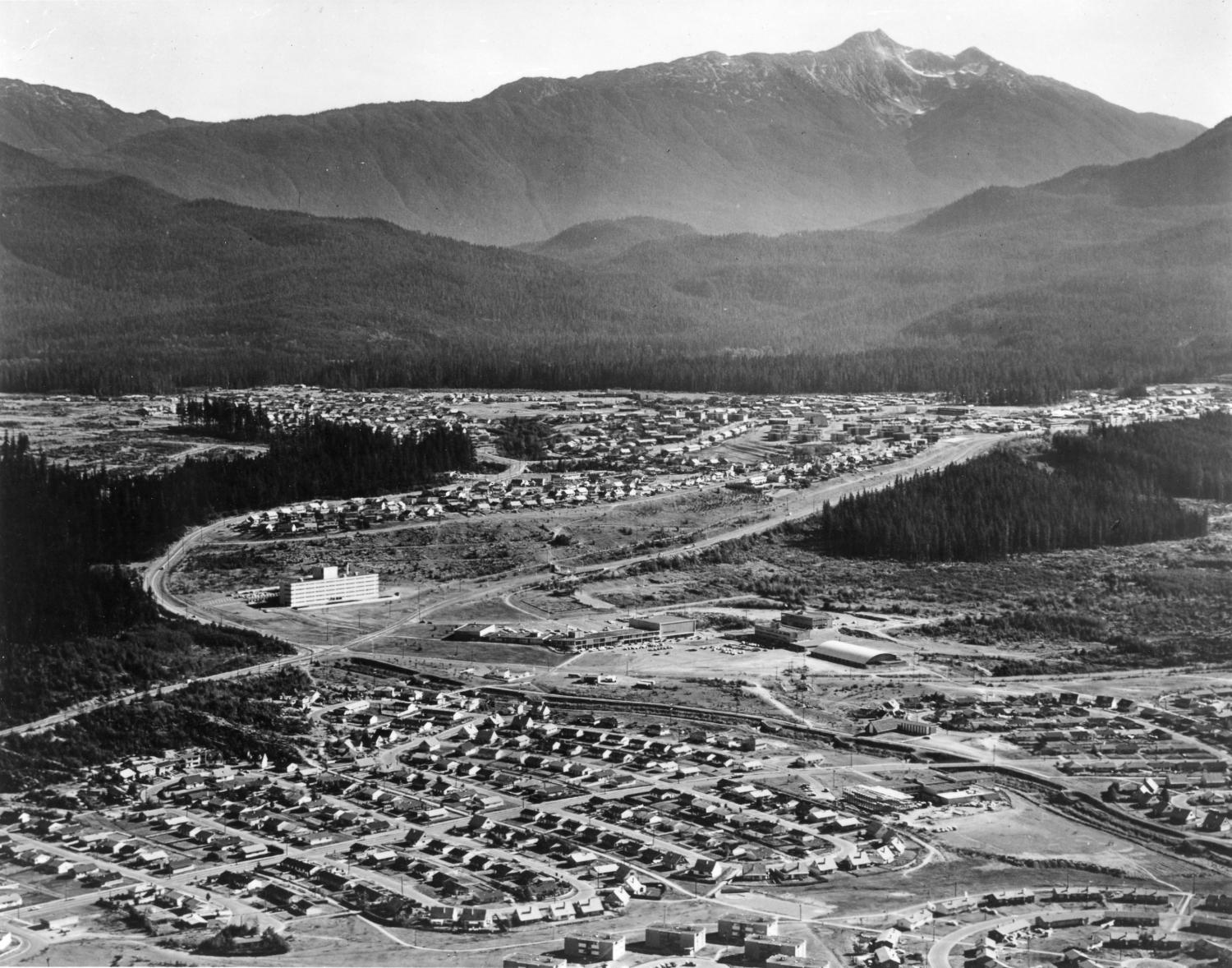 Kitimat’s neat rows of houses in 1966, backdropped by Mount Elizabeth. 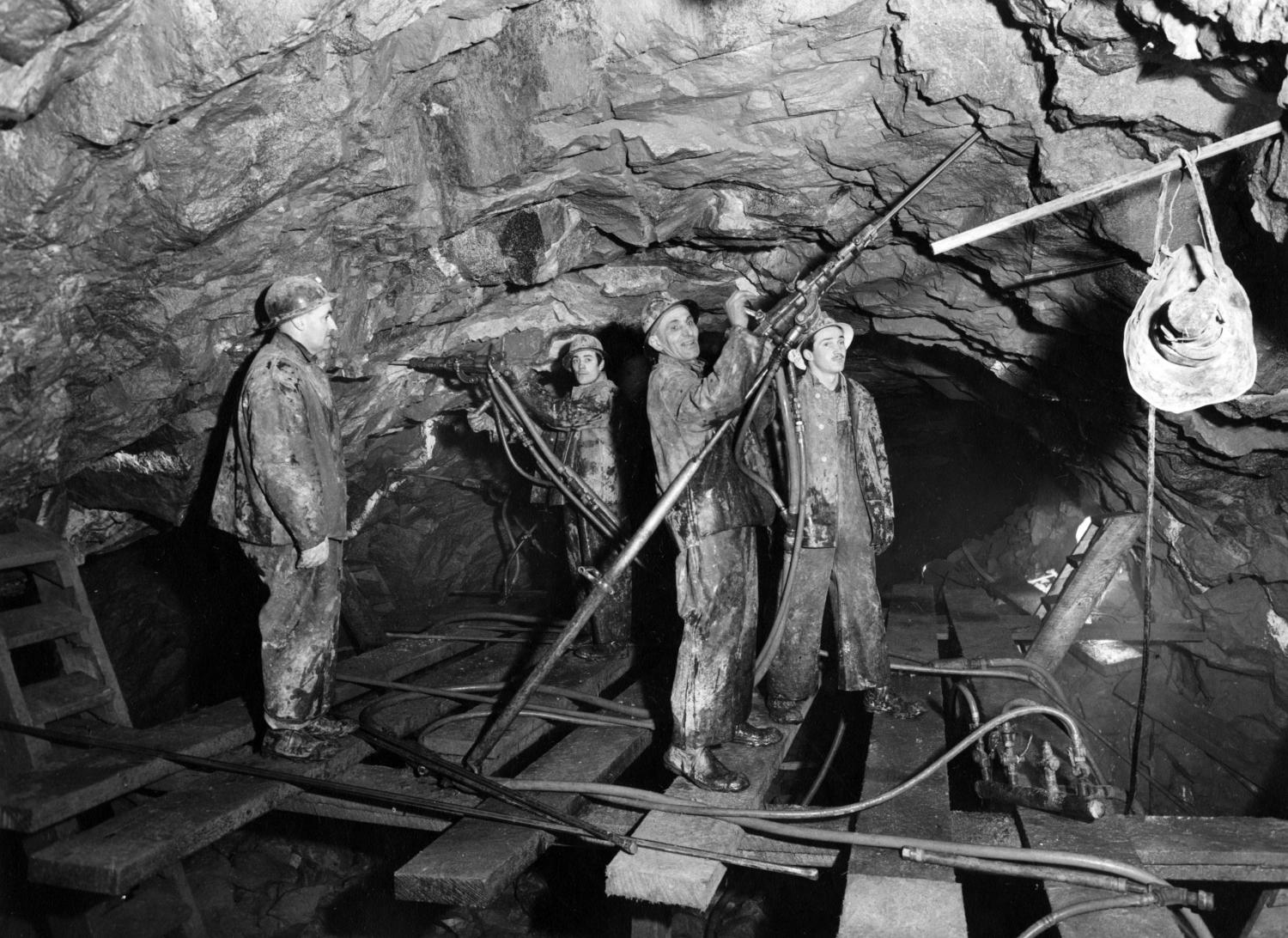 A work crew drilling the 16-kilometre tunnel through the Coast Mountains in 1953. 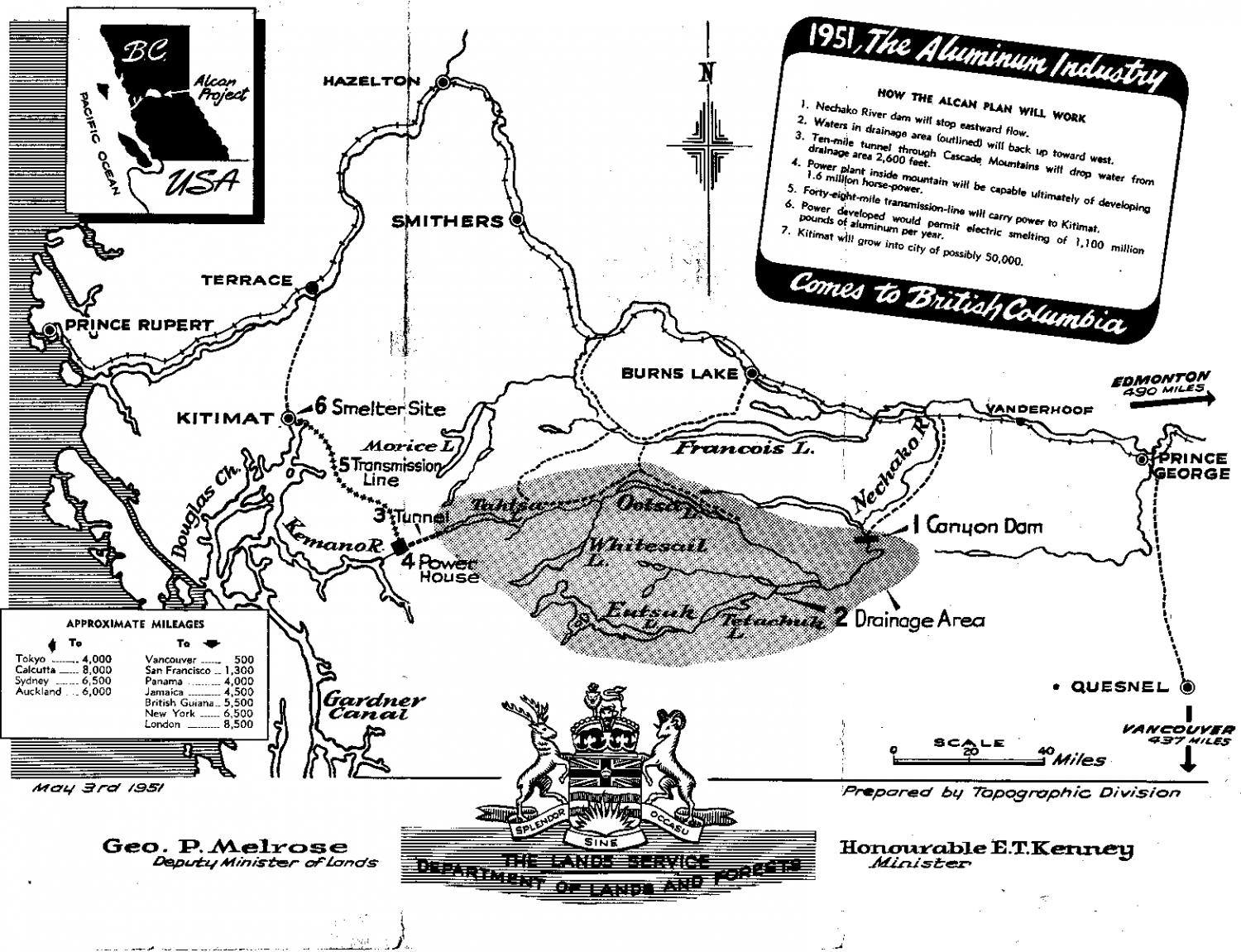 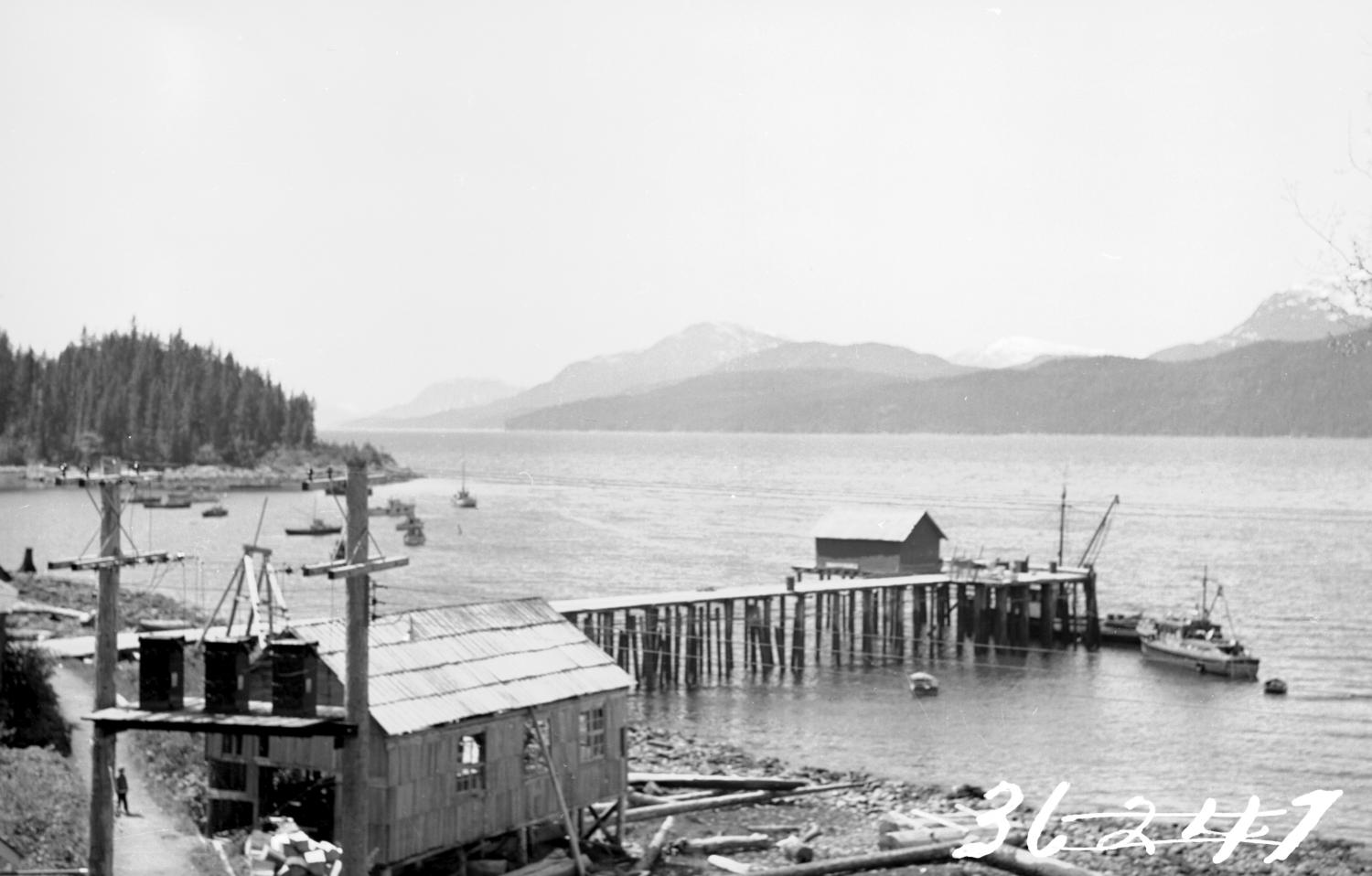 Kitamaat Village in May 1951, just as Alcan was imagining the townsite that would soon sit to its north. 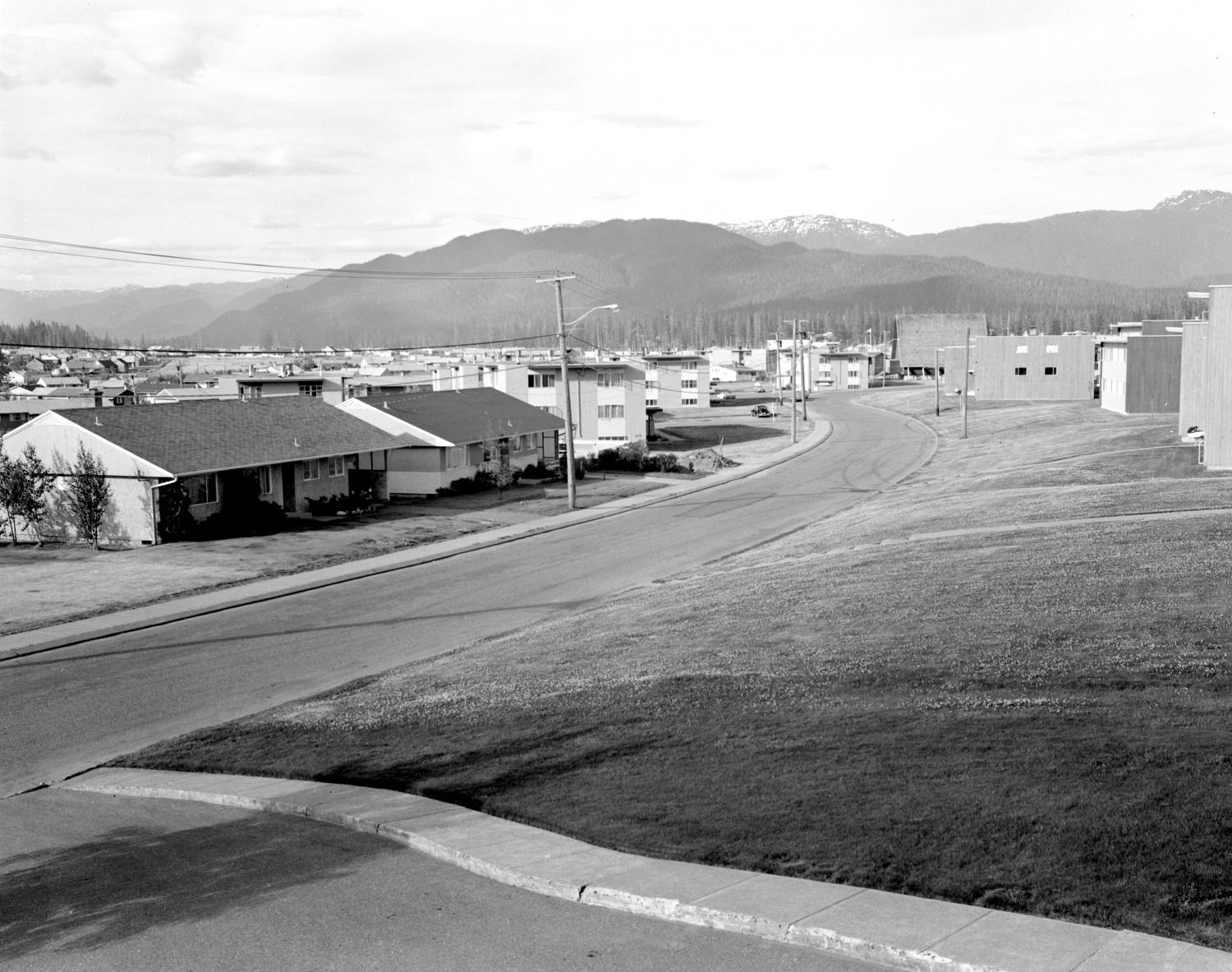 The suburbs of Kitimat in 1967, 13 years after Maclean's Magazine called it the "Town of Tomorrow."

Kitimat’s neat rows of houses in 1966, backdropped by Mount Elizabeth.

A work crew drilling the 16-kilometre tunnel through the Coast Mountains in 1953.

Kitamaat Village in May 1951, just as Alcan was imagining the townsite that would soon sit to its north.

The suburbs of Kitimat in 1967, 13 years after Maclean's Magazine called it the "Town of Tomorrow."

It was marketed as the “Town of Tomorrow.” And as Maclean’s wrote in 1954, it was “planned to the last picture window, the first cemetery.”

The story begins in the post-war boom of the late 1940s. The British Columbia government wanted to modernize the province’s rugged north and increase the area’s population. It invited the Aluminum Company of Canada (Alcan) to tour B.C.’s northwest to determine whether it was suitable for a notoriously energy-intensive aluminum plant. By 1951, the provincial government and Alcan had entered into a whopping $500-million partnership — about $5 billion in today’s dollars — to build a wildly complex hydroelectric system that would power an aluminum smelter in a coastal town that did not yet exist: Kitimat.

The plan involved damming the Nechako River and blasting a 16-kilometre tunnel through the Coast Mountains to bring water to a colossal power generating station in a purpose-built town called Kemano. The power generated in Kemano would then run through 80 kilometres of transmission lines until it reached Kitimat’s smelter. This location wasn’t chosen at random. The Nechako’s rushing rapids offered Alcan the enormous amount of power that smelting aluminum requires. And Kitimat was the perfect endpoint. Located at the head of the Douglas Channel on B.C.’s north coast, Kitimat — named after the Haisla’s local Kitamaat Village — allowed for a deepwater port, providing Alcan with valuable access to overseas markets.

Development on the megaproject got underway in 1951, just as Alcan was handpicking planners from New York City to start blueprinting Kitimat. This wasn’t going to be your typical company town. A year after Kitimat was incorporated in 1953 — despite not yet featuring a permanent home — Maclean’s called it a model city: “No housewife will be more than a five-minute walk from a community shopping centre or baby clinic.” Within 10 or 15 years, Alcan expected Kitimat’s population to soar to 50,000. Though considerably smaller in scope, a company town was also built around the Kemano Generating Station, located in the base of Mount Dubose, roughly 80 kilometres inland. Like Kitimat, the name ‘Kemano’ was inspired by a strand of the local Haisla people. Or, as a 1955 edition of Nation’s Business put it, “an old tribe of nomadic Indians whom [sic] once roamed the pleasant Kemano Valley.”

The powerhouse and smelter went into operation in 1954. Kemano could now boast that it produced more hydroelectricity than any other plant in the world. Within a short span, the grandiosity of the project — one which featured water rushing over a human-made drop 16 times greater than Niagara Falls — had attracted global attention. “Kitimat, Canada’s Aluminum Titan,” read a 1956 headline from National Geographic, which described the enterprise as “the most expensive project ever attempted by private industry.”

But the fawning press neglected to mention the people who had long lived on these lands. Kitimat was built on the traditional territory of the Kitamaat, while Kemano was built on Kitlope land. The Haisla — an amalgamation of the Kitamaat (also known as Haisla) and the Kitlope (Xenaksiala) — have occupied the region for more than 9,000 years. Curiously enough, the federal government facilitated the union of the two bands in 1948, just three years before Alcan’s project began. At the time, some Haisla supported the endeavour. That wasn’t the case for the nearby Cheslatta T’en Nation. The Cheslatta once lived on the banks of the Murray and Cheslatta Lakes. But government officials forcibly evicted them just days before the newly-built Kenney Dam flooded their ancestral lands, permanently upending a long-held way of life, erasing traplines and other marks of their past. The community now lives on a scatter of reserves around Francois Lake, some 185 kilometres north of their traditional homeland.

Meanwhile, the Saik'uz and Stellat’en First Nations, relatives of the Cheslatta, say damming the Nechako River nearly 70 years ago has devastated local salmon and sturgeon populations. The two nations are currently fighting in the B.C. Supreme Court to restore the river’s health.

Neither Alcan nor the government meaningfully consulted local First Nations. And none had a say in the remarkable concessions the provincial government made for Alcan. In addition to tax breaks, the government gave the Québec-based company the title to all lands flooded to create the Nechako Reservoir, created by the Kenney Dam, as well as all land for the Kitimat and Kemano townsite and all mineral rights along the tunnel’s route. In addition, the company was allowed to “rent” all water in the Nechako Basin for 50 years for an astoundingly low rate — roughly one-twentieth the amount of any other water customer in British Columbia, including BC Hydro.

In the end, Kitimat’s population never reached 50,000. It peaked around 13,000 in the early 1980s. Today, it sits below 10,000. Meanwhile, Kemano no longer exists. But both the smelter and the generating station that powers it are still running. Alcan might not have built a “Town of Tomorrow,” but it forever transformed the landscape and the people who have called it home for millennia.