Vancouver’s only Black neighbourhood displaced after years on the margins 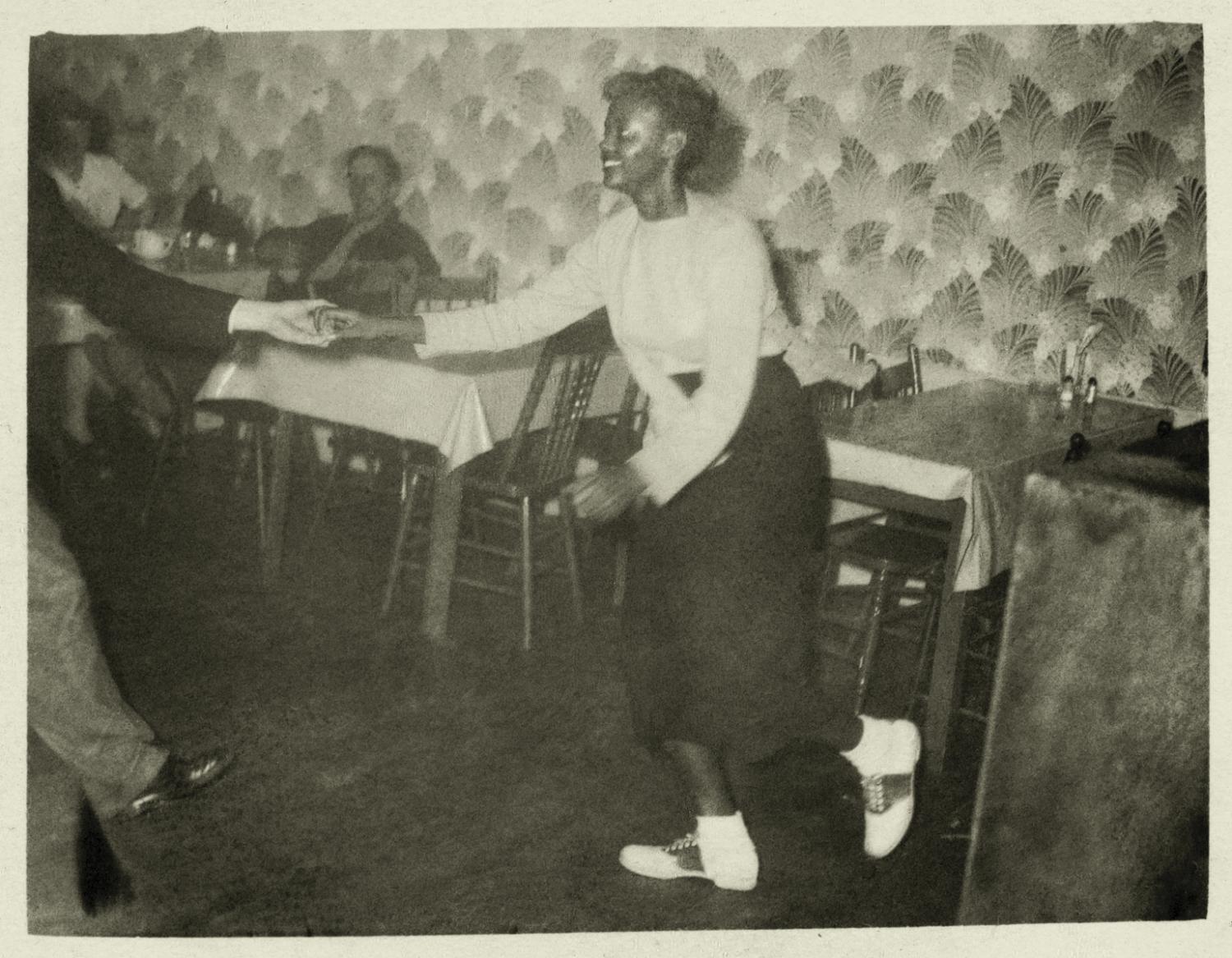 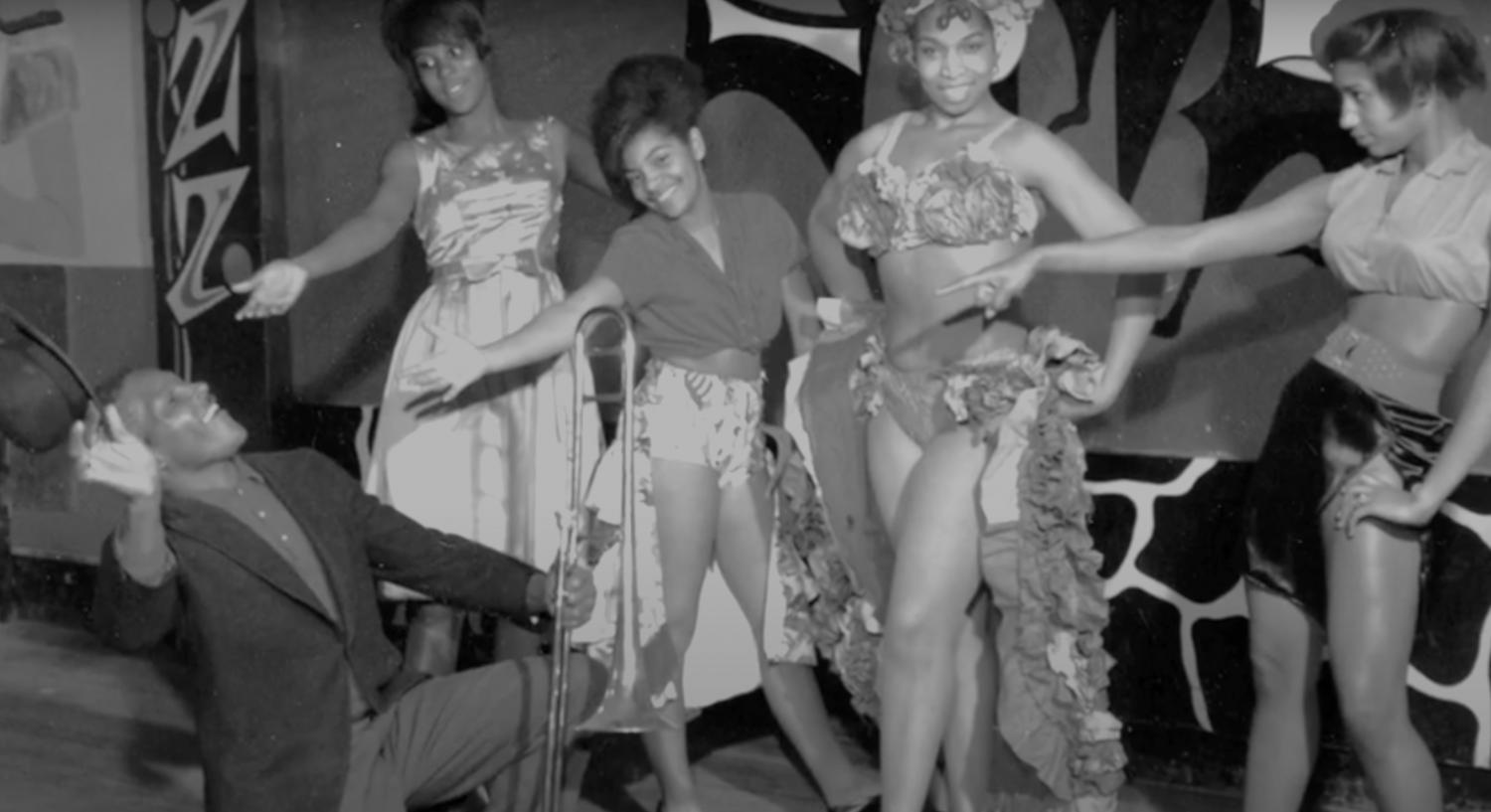 Choo Choo Williams, second from right, performing with her husband Ernie King at their club the Harlem Nocturne.

A Fountain Chapel picnic at Belcarra Park in the mid-1930s. The Fountain Chapel was considered the heart of Hogan’s Alley. In 1985, the church was sold to a private buyer. 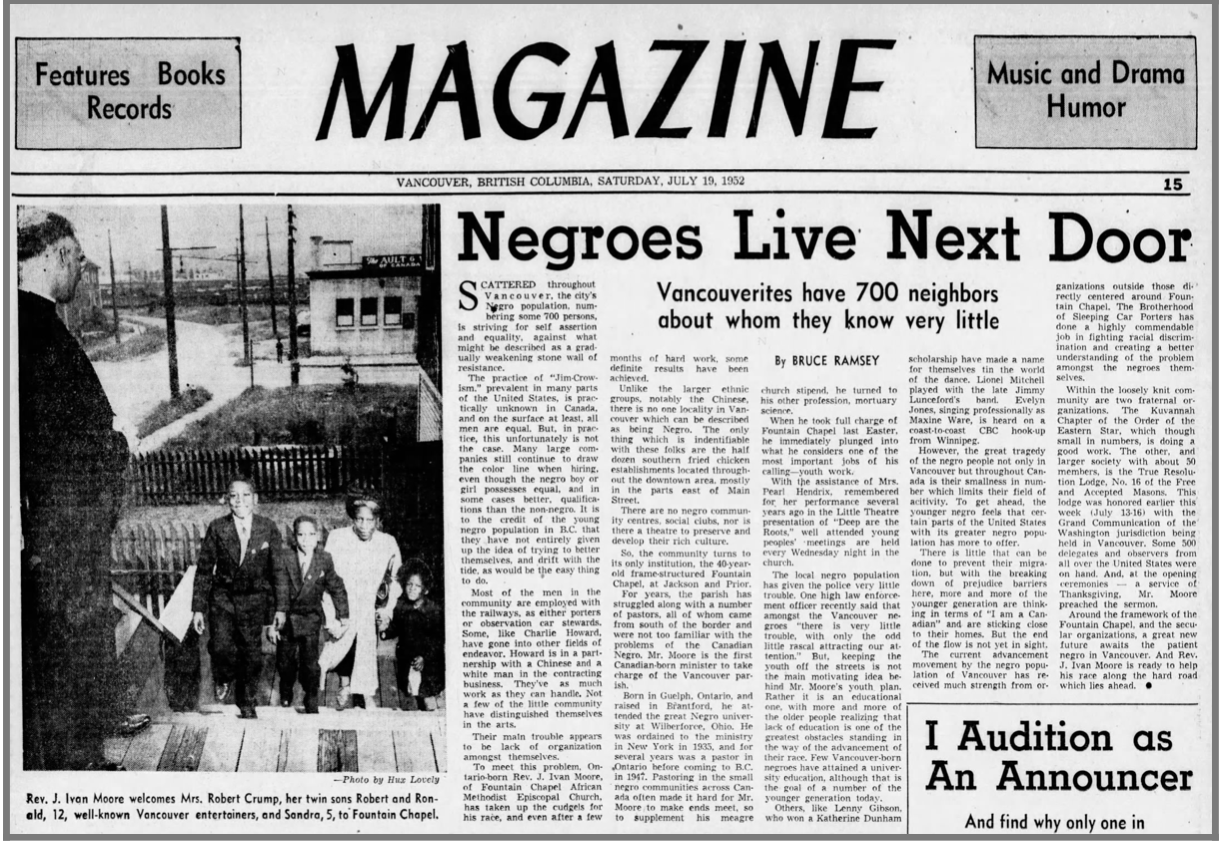 A 1952 feature story on Vancouver’s Black community published by the Vancouver Sun.

A view of Hogan’s Alley in 1958. Besides a formidable Black population, the area was also home to Italians, Jews, Chinese and other new immigrants. 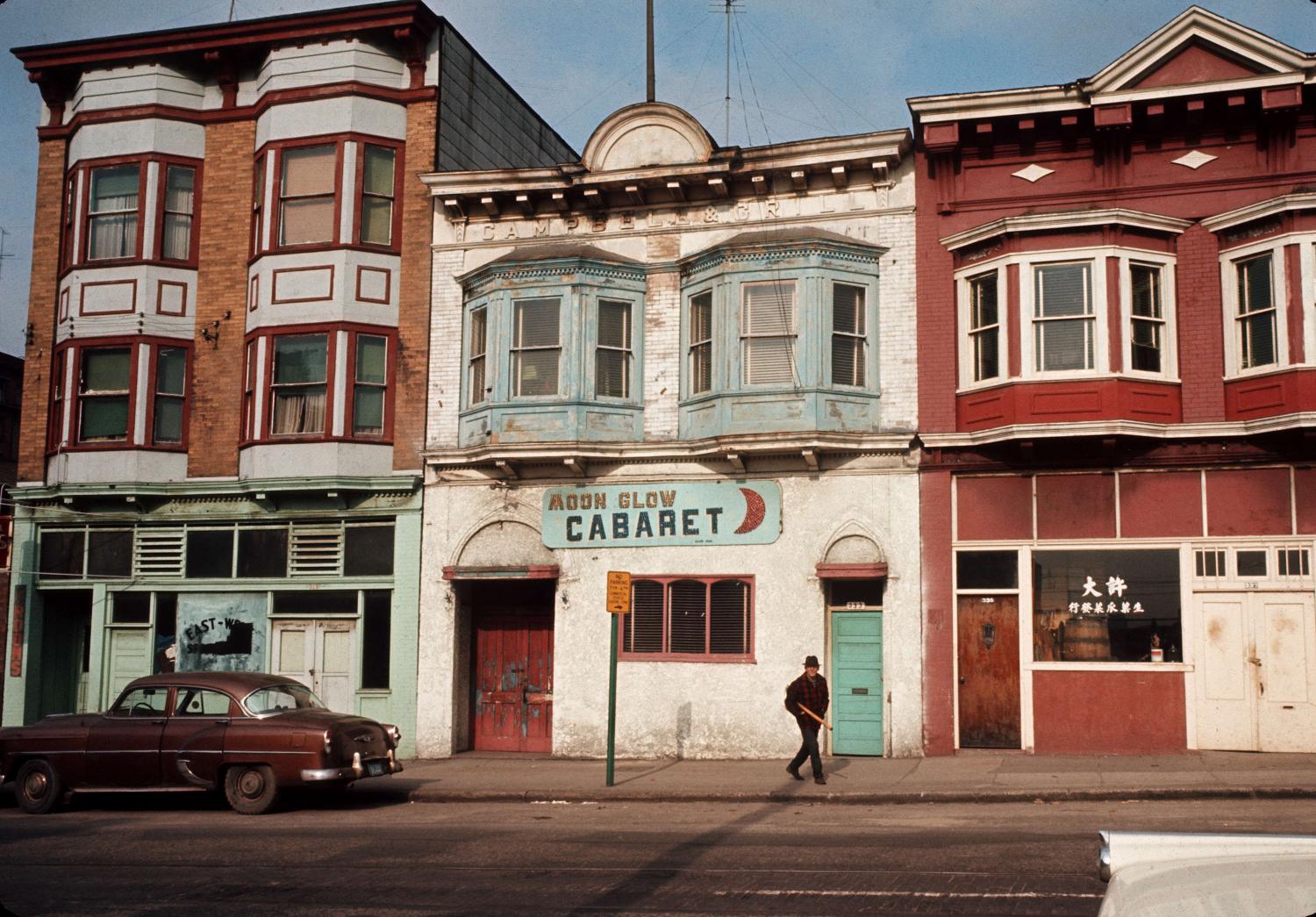 The Moon Glow Cabaret on Georgia Street, a few blocks from Hogan’s Alley, in 1966. Tommy Chong of Cheech and Chong fame would regularly perform at the cabaret, another hang-out for local railway porters.

Choo Choo Williams, second from right, performing with her husband Ernie King at their club the Harlem Nocturne.

A Fountain Chapel picnic at Belcarra Park in the mid-1930s. The Fountain Chapel was considered the heart of Hogan’s Alley. In 1985, the church was sold to a private buyer.

A 1952 feature story on Vancouver’s Black community published by the Vancouver Sun.

A view of Hogan’s Alley in 1958. Besides a formidable Black population, the area was also home to Italians, Jews, Chinese and other new immigrants.

The Moon Glow Cabaret on Georgia Street, a few blocks from Hogan’s Alley, in 1966. Tommy Chong of Cheech and Chong fame would regularly perform at the cabaret, another hang-out for local railway porters.

Hogan’s Alley was the informal name for Park Lane, an eight-foot-wide, dirt alley at the southwestern edge of Vancouver’s Chinatown. It only stretched a few blocks, sandwiched between Union and Prior Streets, running from Main Street to Jackson Avenue. However, over time, Hogan’s Alley came to define the homes, businesses and people surrounding Park Lane. As for the name 'Hogan's Alley,' it first appeared in the city archivist’s notes in 1914 and, at least initially, carried a derogatory connotation. Historians believe the name stemmed from a popular American cartoon depicting an overcrowded Irish slum in New York.

But Vancouver’s Hogan’s Alley wasn’t an Irish borough. It boasted a diverse population, however, it was most widely known as the heart of the city’s Black community. Black families, many originally hailing from California or Oklahoma, began planting roots in Hogan’s Alley in the early 20th century. One reason they settled there was the proximity to the train stations on Main Street. At the time, railway porters were overwhelmingly Black men; racial discrimination prevented people of colour from securing most other forms of employment. Similarly, minorities also had little choice as to where they could live in those days, sometimes barred from entire neighbourhoods due to restrictive covenants and redlining. “Many of them could afford to live elsewhere,” Vancouver planner Leonard Marsh wrote about the area’s Black population in 1950. “But it is too obvious that they would not be welcome.”

Contrarily, Hogan’s Alley was a sanctuary. “Moving through Hogan’s Alley, particularly for black people, would have been that experience of being welcomed, of feeling belonging in this city,” said Adam Rudder, founding director of the Hogan’s Alley Society.

Nora Hendrix, the grandmother of legendary guitarist Jimi Hendrix, was a fixture there, and one who eventually outlived the community. In 1918, Hendrix co-founded the African Methodist Episcopal Fountain Chapel at 832 Jackson Avenue, at the eastern end of Hogan’s Alley. The Fountain Chapel, as it was better known, was Vancouver’s first Black church. A year later, Rosa Pryor became the city’s first Black female business owner when she opened Pryor’s Chicken Inn at 278 Keefer. The first restaurant in Vancouver to serve Southern-style fried chicken was located in Pryor’s house and offered only five or six tables — as well as a piano and jukebox. Soon, fried chicken restaurants became a staple of the neighbourhood, the most famous being Vie’s Chicken and Steak House, a wildly popular all-night eatery that opened in the late 1940s.

While the congregation at Fountain Chapel was made up of the local Black community, restaurants like Vie’s attracted people of all colours. Night owls like police, lawyers and reporters would drop in at all hours of the evening for baking soda biscuits, pan-fried steaks and bowls of green peas. Even famous musicians on tour, like Sammy Davis Jr. and Duke Ellington, made a habit of stopping by Vie’s. But Hogan’s Alley didn’t just attract legends like Nat King Cole for its soul food. By the ‘30s and ‘40s, the neighbourhood had become a destination for party-goers and music lovers alike. “You could go by at six or seven o’clock in the morning, and you could hear jukeboxes going, you hear somebody hammering the piano, playing the guitar, or hear some fighting, or see some fighting, screams, and everybody carrying on,” recalled Austin Phillips, a blues musician and former Hogan’s Alley resident.

There was the Pullman’s Porter Club on Main, a haunt frequented by local railway employees. And the smoke-filled underground speakeasies, where gamblers mixed with expert blues musicians. Later on came clubs like the Moon Glow Cabaret, an establishment owned by a railway porter named Daddy Clark. Located a little outside the neighbourhood at 343 Hastings Street, the Harlem Nocturne was owned by Hogan’s Alley residents and performers Ernie King and Marcella “Choo Choo” Williams. When the Nocturne opened in 1957, it was the city’s only Black-owned club.

But despite the music, food and vibrant community — the mix of families from different backgrounds living side by side — many outsiders saw only squalor. From early on, government officials and the press focused almost exclusively on the area’s crime and poverty. “Hogan’s Alley No Place for Stroll,” read one Vancouver Sun headline from 1945. A few years later, the same newspaper ran a sympathetic albeit offensive story about Vancouver’s Black community entitled simply, “Negroes Live Next Door.” As early as 1929, city officials were debating what to do about the “slum.” But the city itself contributed to the so-called “blight” they so strongly condemned. Former Hogan’s Alley residents say basic services like garbage collection and road maintenance were frequently neglected, leaving the community to fall into disrepair.

In the late 1960s, city officials finally had a plan for what they saw as unwanted blight and a community of little value. Embracing “urban renewal,” a planning craze then sweeping North America, Vancouver sought to wipe out poorer, mostly-immigrant neighbourhoods by bulldozing them and constructing a freeway into the city’s downtown. Spirited protest and a lack of funds stopped the freeway, saving Vancouver’s historic Chinatown. But not before crews began bulldozing the western end of Hogan’s Alley in 1967 to make room for the Georgia and Dunsmuir Viaducts. Many Black families, who had experienced racial terror in the places they migrated from, left in the lead-up to redevelopment, likely preferring to avoid trouble. By the time the viaducts were unveiled in 1972, Hogan’s Alley was only a ghost of what it once was.