Wet'suwet'en deemed “squatters” on their own territory 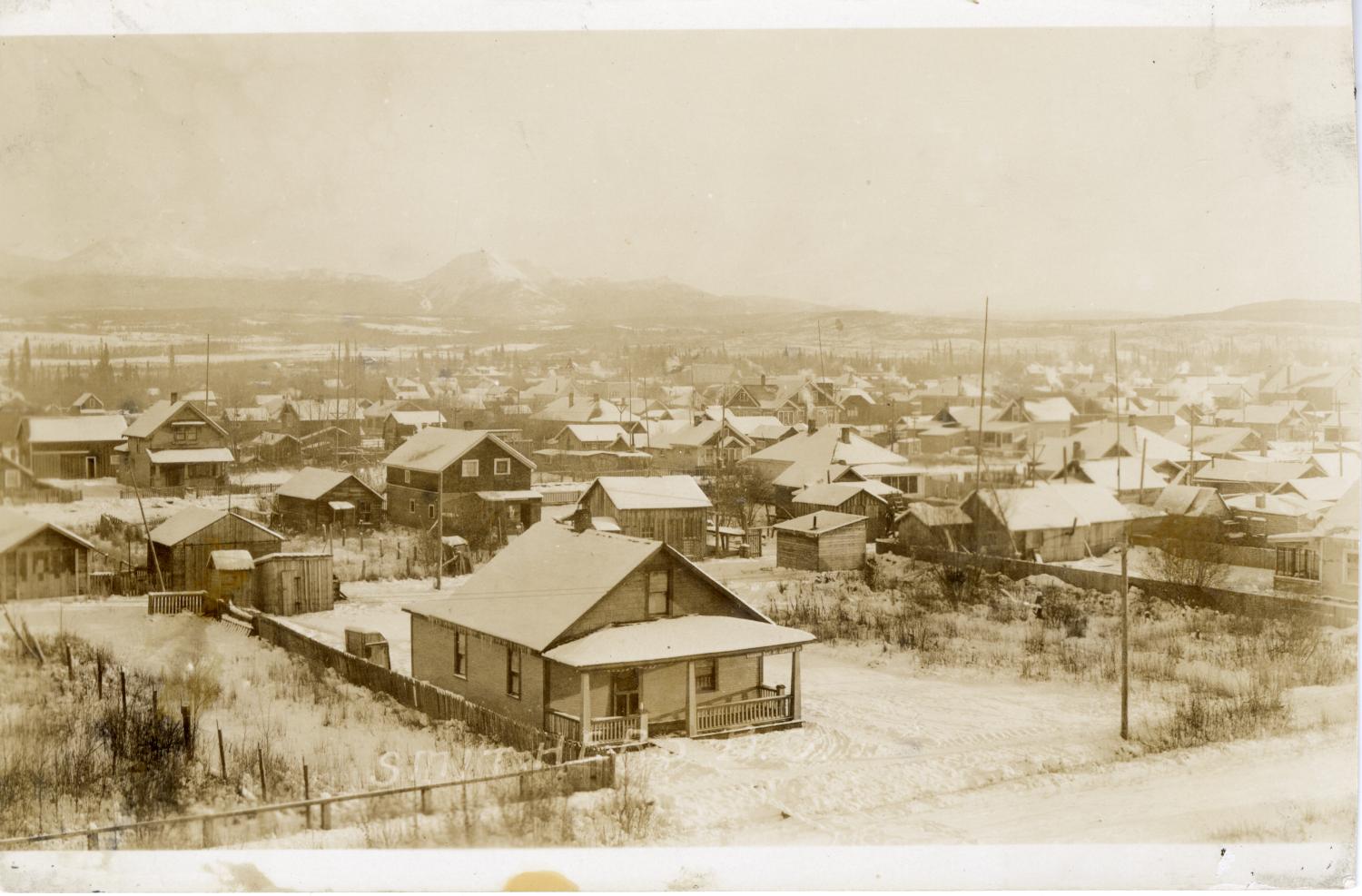 Smithers in the 1950s. Though systematically marginalized, the local Wet'suwet'en still participated in some aspects of the settler community, particularly in sports and the annual agricultural fair. 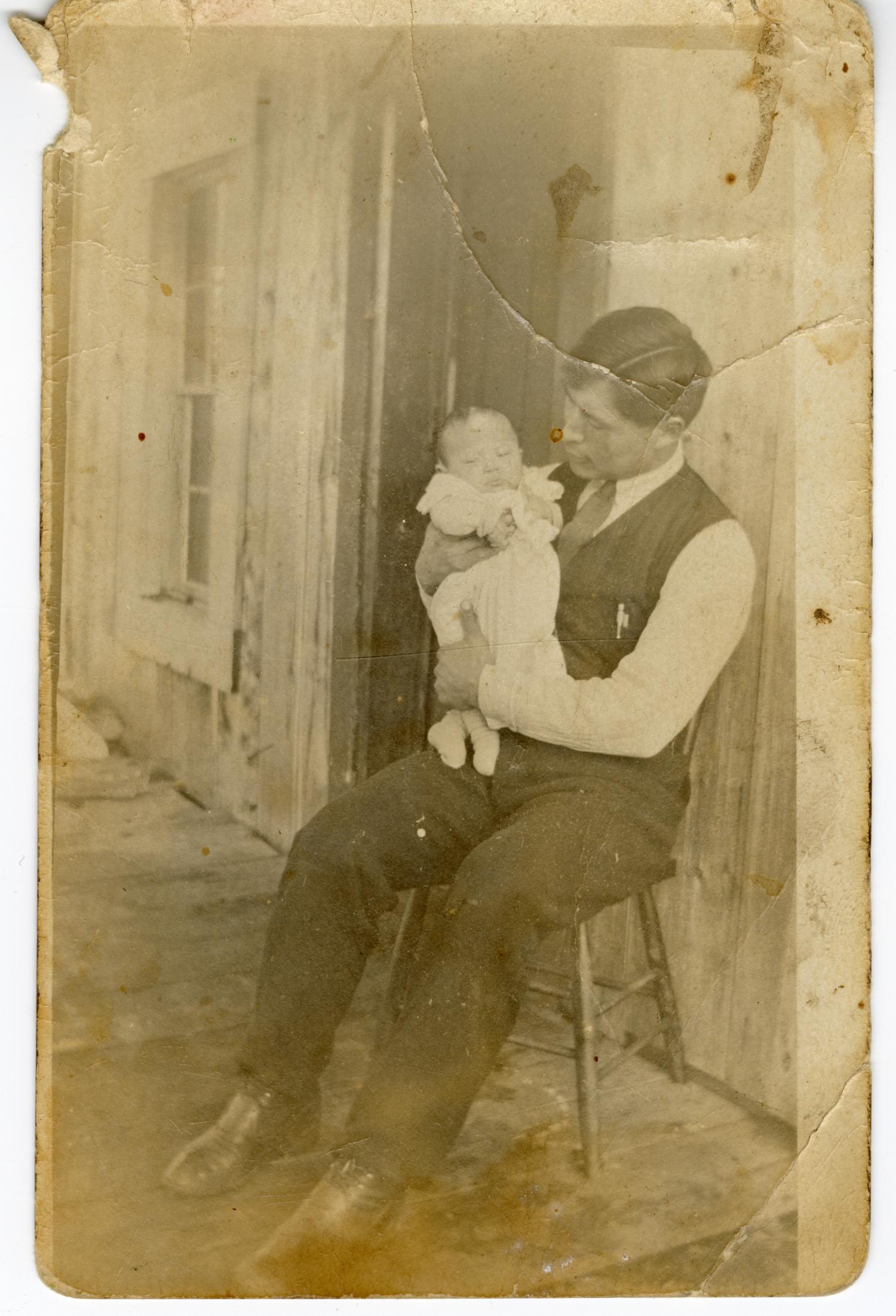 Jack Joseph holding his son Frank in 1917. Known as a peacemaker between the Wet'suwet'en and settlers, Joseph served as a government-appointed chief for the Moricetown Band.

Smithers in the 1950s. Though systematically marginalized, the local Wet'suwet'en still participated in some aspects of the settler community, particularly in sports and the annual agricultural fair.

Jack Joseph holding his son Frank in 1917. Known as a peacemaker between the Wet'suwet'en and settlers, Joseph served as a government-appointed chief for the Moricetown Band.

A Wet'suwet'en neighbourhood colloquially called ‘Indiantown’ once stood on the outskirts of Smithers, a picturesque mountain town in northwestern British Columbia, about halfway between Prince George and Prince Rupert. Then, after numerous attempts by town officials to evict the community, it quietly disappeared.

Smithers sits on swampland at the bottom of a mountain in traditional Wet'suwet'en “yintah,” or territory. The need for a railway station prompted the town’s creation in 1913. Slowly squeezed off their land, the Wet'suwet'en, or “People of the Lower Hills,” watched as new infrastructure and industry transformed their traditional land and, consequently, their way of life. The railway, along with roads and hydroelectric development, allowed settlers to access once-remote hunting and fishing spots the Wet'suwet'en had long relied on.

The Wet'suwet'en people tried hard to adapt to their new reality, engaging in the new wage-based economy and attempting to homestead as the settlers did. Unfortunately, the newcomers and government often stood in their way. The B.C. government’s land policies made it very difficult for Indigenous families to pre-empt desired land — to stake claim to Crown territory for settlement or farming — while allowing settlers to pre-empt vast territory across the province. Often, Wet'suwet'en families who did somehow establish farms on non-reserve land would still be run off by incoming settlers, backed up by the strong arm of the law. In one instance from the early 1920s, a Wet'suwet'en man named Canyon Creek William refused to leave the land that was his namesake. The settler who had claimed the territory returned with a few policemen who threatened to lock the man inside his home and burn it to the ground.

Many of these families moved to reserves or the edge of Smithers — a.k.a. Indiantown. This pattern of Indigenous displacement repeated itself across British Columbia. Located along what is now Highway 16, Indiantown was known for its large homes, frequent visitors and vibrant atmosphere. “It was a bustling little village […] lots of kids out in front of houses. You were always welcome there,” remembered Likhdïlye Russell Tiljoe, who once lived in Indiantown. “If one family weren’t home, the next family, they would invite you in.”

But nearly from the beginning, non-Indigenous Smithers residents resented their Wet'suwet'en neighbours, who they often labelled “squatters.” The municipality refused to provide the community with modern infrastructure like paved roads or waste collection even though homeowners in Indiantown paid their property taxes just like other Smithers residents. As early as 1926, townspeople presented officials with a petition urging them to prohibit “the ownership of land within the municipality by Indians or other coloured […] folks.” Town officials deferred to the province, which informed them this practice was illegal.

In the 1930s, a young girl from Indiantown named Agnes died at the Lejac Indian Residential School at Fraser Lake. Her grieving father Jack Joseph, an influential Wet'suwet'en community leader, resolved to stop any children from returning there. A day school was opened on the nearby Moricetown Reserve, but it proved more difficult to protect children living in Indiantown. Smithers officials refused to allow Indigenous kids to attend the local public school. In response, many homeowners in Indiantown, who had long been denied basic services, stopped paying their property taxes. But the town wouldn’t budge. Instead, officials confiscated the deeds to their homes. Indigenous children did not begin attending public school in Smithers until the 1940s.

Following the tax revolt, Smithers made repeated attempts to erase Indiantown altogether. “Nevertheless,” writes Tyler McCreary, a geography professor born in Smithers, “Wet'suwet'en families persisted on the municipal fringe, claiming a right to a place in town through their resourcefulness and perseverance.” But by the 1960s, Smithers had begun inducing homeowners in Indiantown to sell to make way for motels, laundromats and other businesses. The Wet'suwet'en community was once more displaced and scattered to the margins, where they would again face pressure to disappear. In May 1967, the family of Jack Joseph’s son Louie was the last to be evicted. The town avoided paying compensation for the family’s home by condemning the building and setting it aflame.