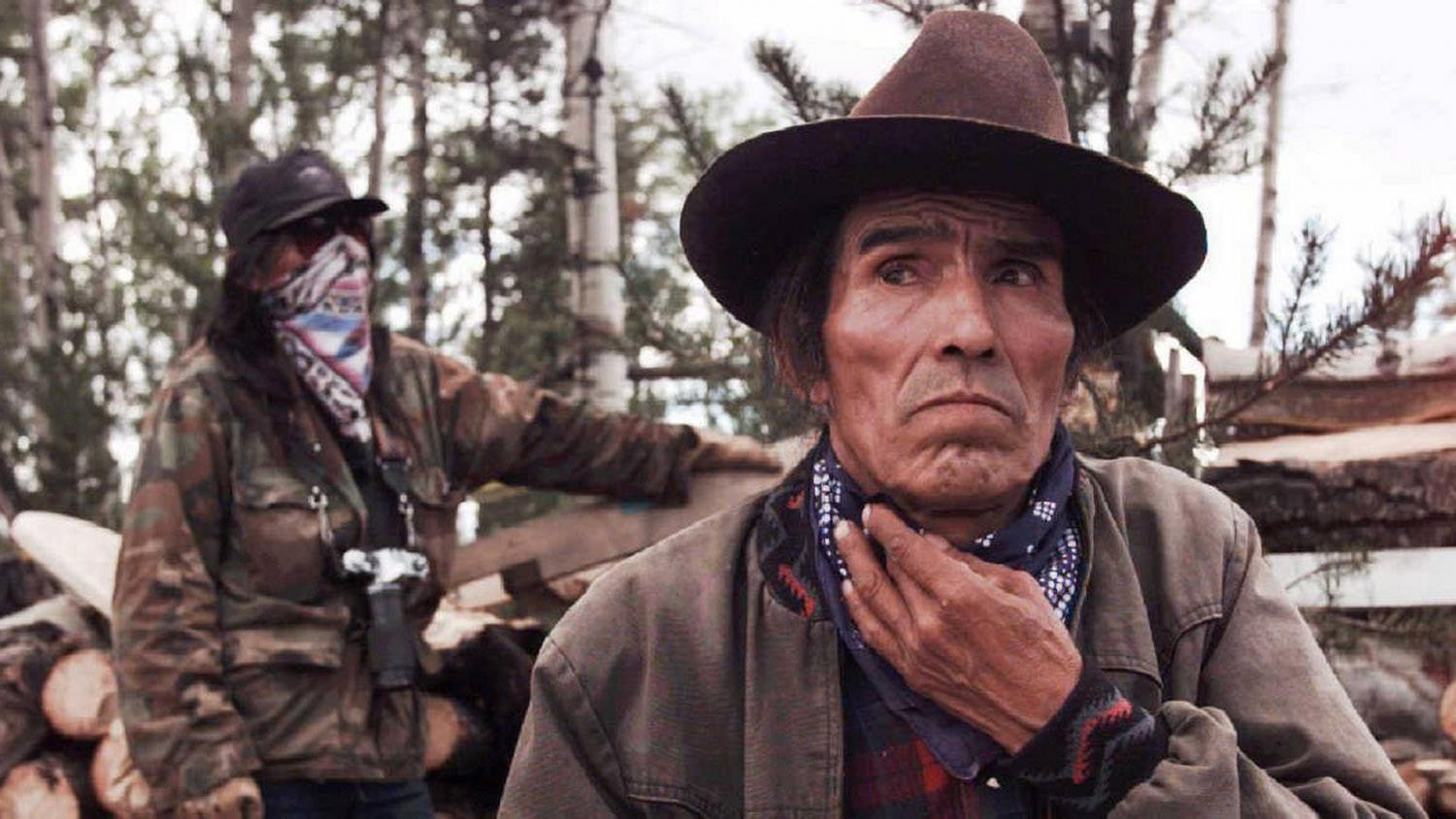 William “Wolverine” Jones Ignace, centre, stands alongside other Ts’Peten Defenders in 1995. Wolverine passed away in 2016.

A military vehicle rushes past a checkpoint near the Defenders’ camp at Gustafsen Lake. The RCMP operation cost an estimated $5.5 million.

William “Wolverine” Jones Ignace, centre, stands alongside other Ts’Peten Defenders in 1995. Wolverine passed away in 2016.

A military vehicle rushes past a checkpoint near the Defenders’ camp at Gustafsen Lake. The RCMP operation cost an estimated $5.5 million.

On Sept. 11, 1995, James “O.J.” Pitawanakwat was behind the wheel when his red pickup truck suddenly hit an improvised explosive device (IED), flipping the vehicle and sending plumes of dark smoke sky high. “I remember driving down the road, and then an explosion just rocked my world and disorientated me for a quick minute, and my combat senses kicked in, and survival set in,” he told APTN News years later.

“I relive that moment every day of my life.”

Pitawanakwat, his female passenger, and his dog ‘Idaho’ somehow weren’t hurt in the explosion. They immediately jumped out of the car and ran for cover, making their way towards a hidden cache of weapons. A 45-minute firefight ensued with thousands of rounds of ammo fired. Somehow no one was seriously injured in the melee — except for Idaho, who was killed by a sniper.

Pitawanakwat later described that moment as “straight out war.” But he wasn’t in a war zone. The 24-year-old Anishinaabe man was driving down a logging road near Gustafsen Lake, about 40 kilometres west of 100 Mile House. The Royal Canadian Mounted Police (RCMP) had planted the IED, and it was at the RCMP who Pitawanakwat and his comrades quickly returned fire. It was the surreal climax of the Gustafsen Lake Standoff, a month-long armed conflict in British Columbia’s Interior that mirrored other standoffs over Indigenous sovereignty in Canada in the 1990s, specifically the Oka and Ipperwash Crises.

It only took a few weeks for a minor private property dispute to snowball into the largest paramilitary operation in B.C.’s history. The story starts in 1990 when American rancher Lyle James first allowed a group of mostly Secwépemc, or Shuswap, people to use his pasture land at Gustafsen Lake for their annual Sun Dance, a multi-day spiritual ceremony practiced in the summer by some Indigenous across North America. Conflict arose in 1995 when the Sun Dancers erected a small fence to keep cattle from trampling a sacred Secwépemc burial site weeks before the Sun Dance. In response, an angry James served the Sun Dance campers with an eviction notice. The rancher and his employees reportedly harassed the camp with racist taunts and “warning shots,” but the ceremony still went ahead.

After the ritual ended, the Sun Dancers refused to leave and began calling themselves the Ts’Peten Defenders, a reference to the Secwépemc name for Gustafsen Lake. A local feud had now morphed into a fight over Indigenous title with grand political consequences. As the Secwépemc had never formally ceded the land James now owned, the Defenders saw it as their duty to take a stand, though some local band representatives didn’t support them, saying some weren’t even from the area. As summer wore on, negotiations went nowhere and the Defenders became more brazen, firing stray shots at Mounties and forestry surveyors. The spat escalated further in mid-August when William “Wolverine” Jones Ignace, a spokesperson for the Defenders, warned the RCMP to expect “body bags” if they attempted to remove the camp by force: “We’re not going to go peaceful.”

To confront what B.C. Attorney General Ujjal Dosanjh called “undisputed lawlessness,” the RCMP worked with the Canadian military to set up “Camp Zulu.” According to court documents, the camp had armoured personnel carriers, helicopters, a field hospital, and roughly 400 “heavily-armed militarized police.” Following the chaos of Sept. 11, the RCMP took responsibility for the explosive Pitawanakwat hit but insisted he had driven outside of agreed-upon boundaries. A week later, the remaining 18 campers surrendered. Wolverine, a leader in the protest, was sentenced to eight years in prison but was released after five. Pitawanakwat also landed in jail. After serving a year of his sentence, he fled to the United States while on day parole in 1998. Canada sought his extradition, but an American court rejected the request. Pitawanakwat remains a political exile to this day, unable to return home.

Critics have not only accused the RCMP and the provincial NDP government of needlessly escalating the conflict but also point to evidence showing the police employed a targeted smear campaign against the Ts’Peten Defenders. Despite numerous calls for an inquiry into the incident, one has yet to transpire.