Interior chiefs make a direct appeal to the prime minister 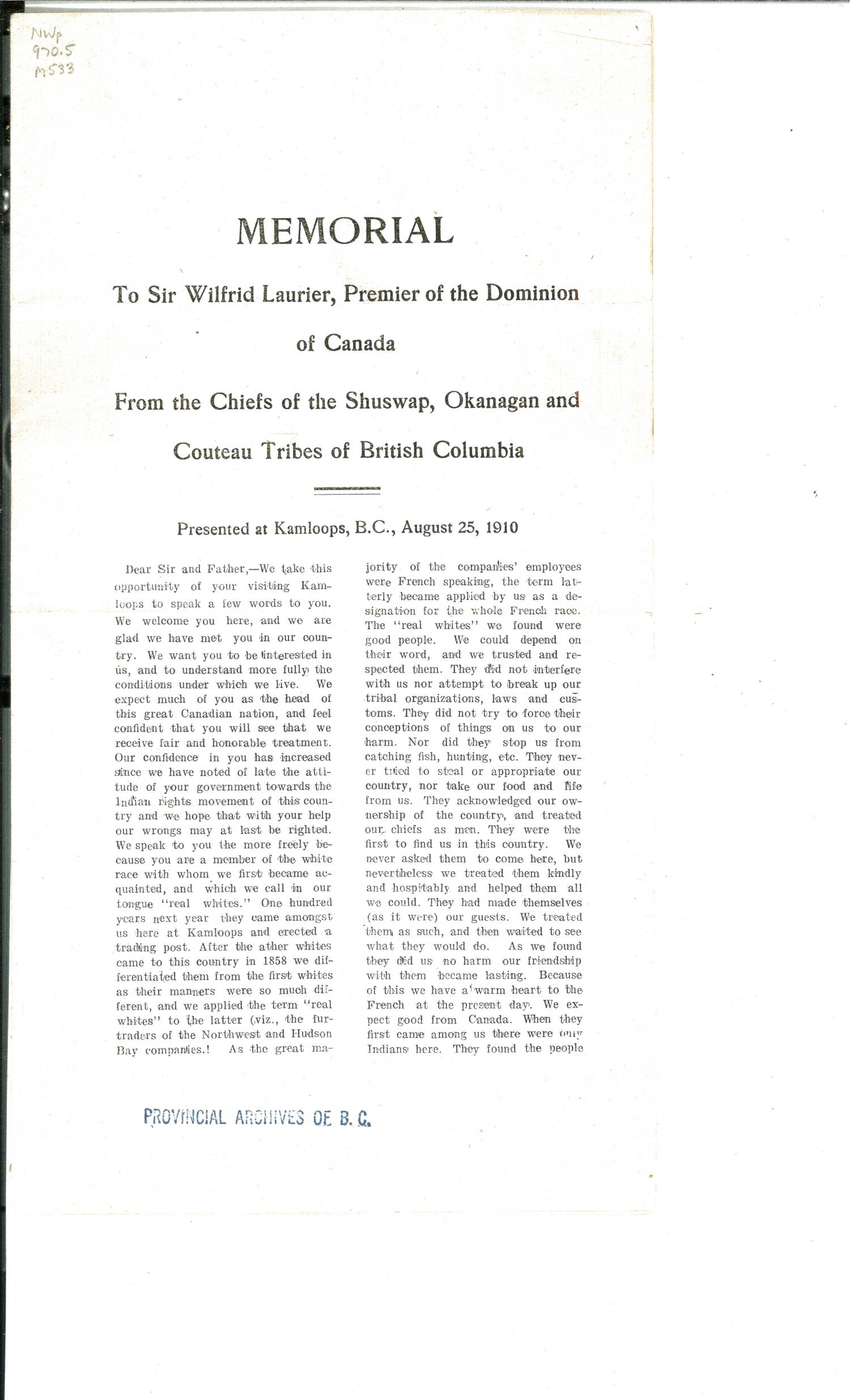 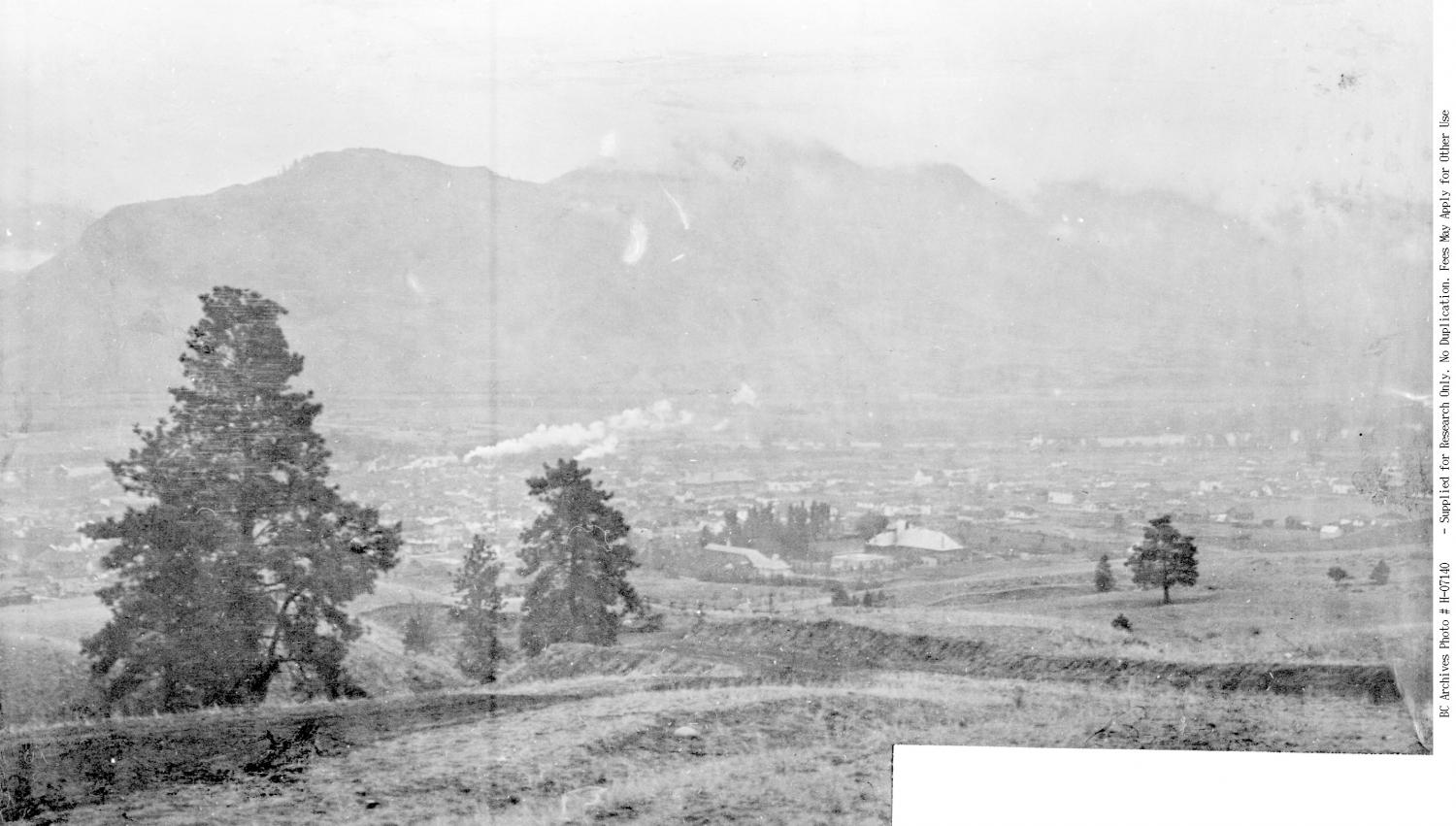 Kamloops in the distance in 1913, a few years after the memorial was delivered.

Author: Royal Commission on Indian Affairs for the Province of British Columbia (1913-1916)

Kamloops in the distance in 1913, a few years after the memorial was delivered.

Author: Royal Commission on Indian Affairs for the Province of British Columbia (1913-1916)

It was 1910: a federal election year. Prime Minister Wilfred Laurier was in the middle of a reelection campaign, making the requisite stop in British Columbia. Upon arriving in Kamloops on Aug. 25, Laurier was approached by a cross-cultural delegation composed of chiefs from the Secwépemc, Nlaka'pamux, and Syilx Nations, as well as a Scottish ethnologist named James Teit and the French priest Father Jean-Marie Raphael Le Jeune.

They had come to deliver a document, a "memorial" of sorts.

The chiefs in the delegation were products of a time of transition. Many were born in the first half of the 19th century and could provide firsthand accounts of the region's transformation from fur-trading hub to British colony to Canadian province. They were alive when the first white men — the seme7úw'i or "real whites" — arrived, during the turbulence of the Tŝilhqot'in War, and for the devastation wrought by smallpox.They saw the spread of railways across their traditional territory, while their communities were increasingly confined to small parcels of land without consultation or consent.

This memorial recounted a generation's worth of change. It weaved the history of the province, and Indigenous relations with Europeans, with demands for new treaties and a rejection of the current takeover of their homes. It called for the recognition of Indigenous sovereignty and rights to traditional land. "So long as what we consider justice is withheld from us," it read, "so long will dissatisfaction and unrest among us, and we will continue to struggle to better ourselves."

This wasn't the first time Prime Minister Laurier had heard such sentiments. After a spike in Indigenous activism in the early 1900s, he had commissioned a lawyer, T.R.E. McInnes, to prepare a report on Indian title. Even without Indigenous input, McInnes had concluded that First Nations in B.C. had been unlawfully stripped of their lands. But his report wasn't released to the public, and the federal government would not accept its findings.

This time, however, the prime minister was more receptive. Laurier told them he would give their case special attention. The following year, though, he lost the federal election. And his word to the chiefs in Kamloops was never honoured by his successor, Prime Minister Robert Borden.

But the Laurier Memorial was part of something larger. For the first time since Europeans had arrived in the Pacific Northwest, different Indigenous communities from across the region were now rallying together as a united front, taking on the Canadian legal system directly. For their part, the federal government was growing increasingly wary about the power in this new collective action. In the coming years, Canada would take legal steps to curtail Indigenous activism, culminating in Section 141 of the Indian Act, which barred Indigenous people from even retaining a lawyer to fight for their rights.