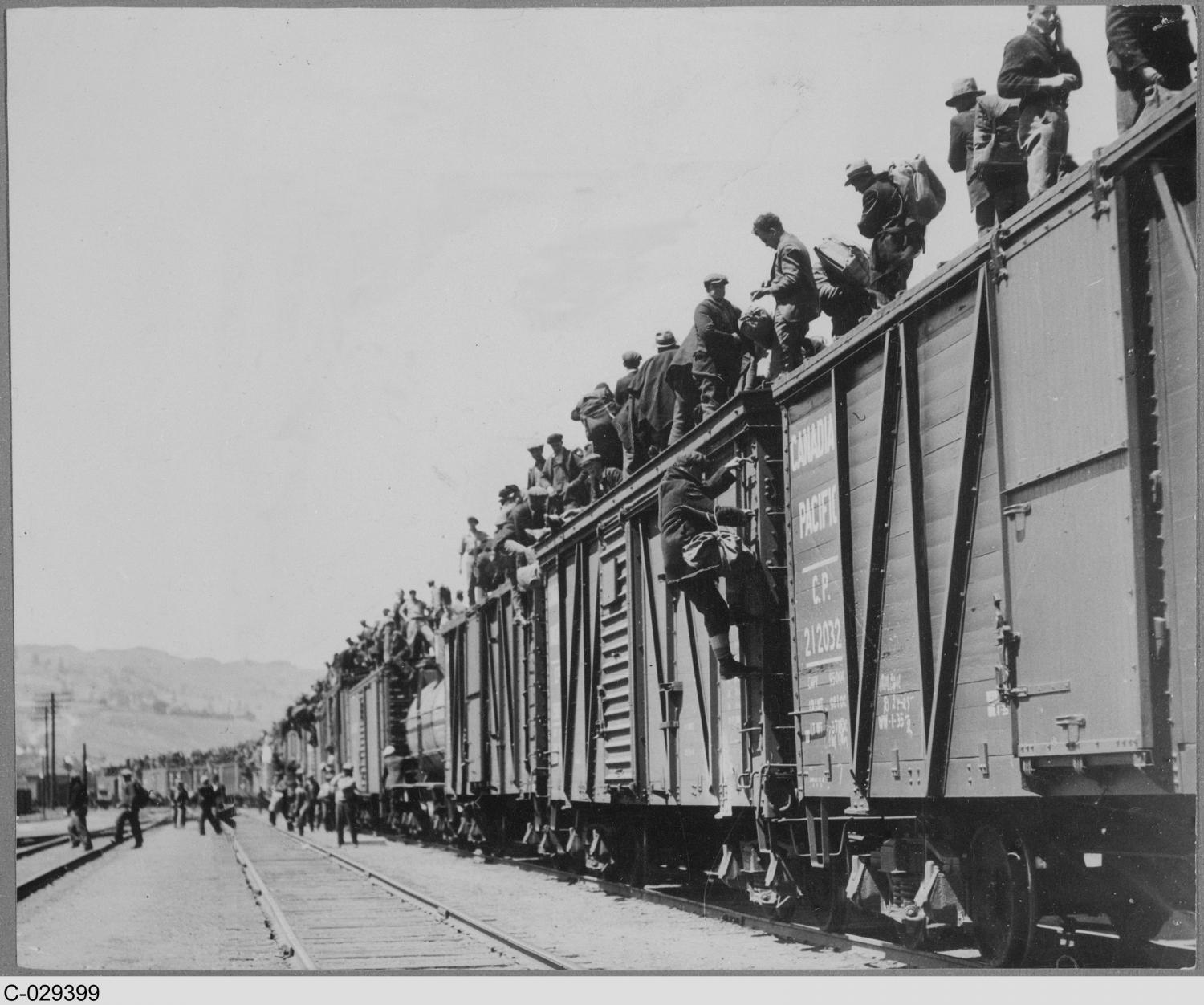 Relief camp workers riding the rails on their trek to Ottawa in June 1935. 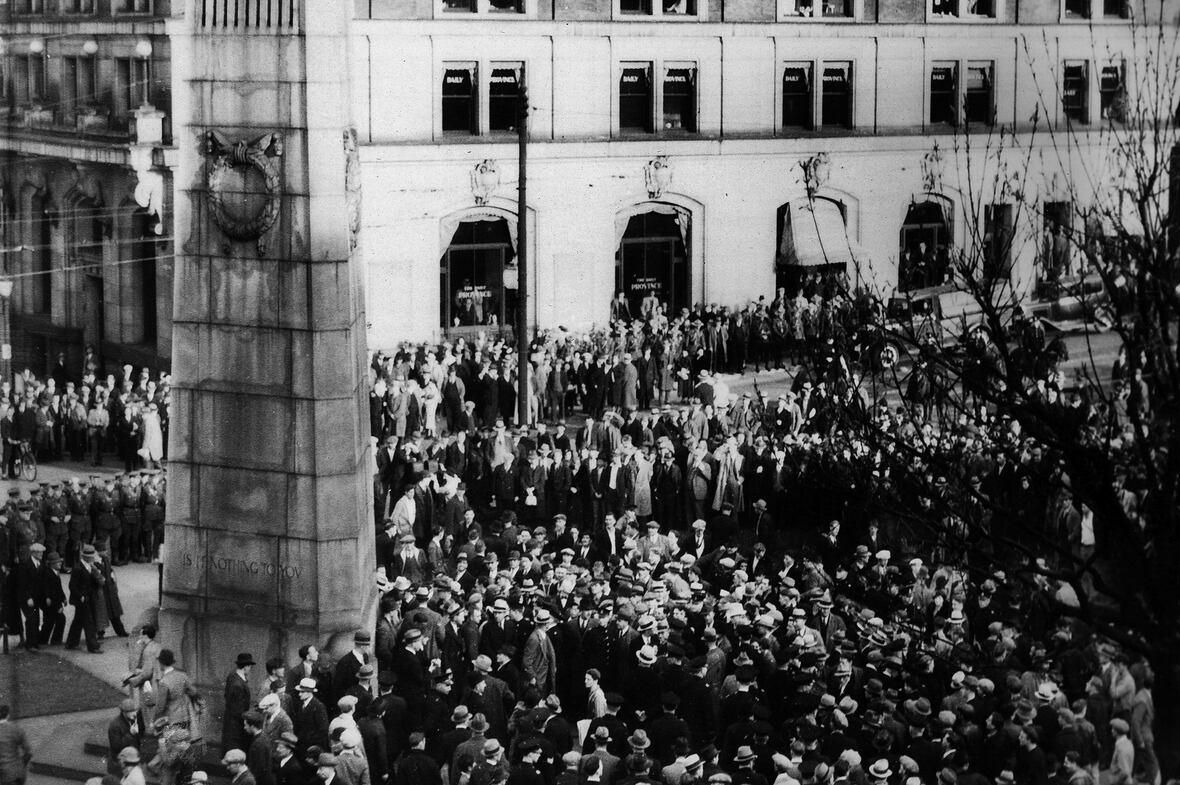 Police and demonstrators clash at the Regina Riot on July 1, 1935.

Relief camp workers riding the rails on their trek to Ottawa in June 1935.

Police and demonstrators clash at the Regina Riot on July 1, 1935.

On April 4, 1935, thousands of workers put down their pickaxes, shovels, and other tools and deserted British Columbia’s relief camps, hitching rides on boxcars bound for Vancouver. However, the ultimate destination would be Ottawa.

This wasn’t the first walkout among relief camp workers, but it was the largest. Over five years had passed since the stock market crashed on Black Tuesday, signalling the start of the Great Depression. While the markets in the United States seemed to be recovering, Canadians saw no such progress at home. Instead, the government had herded thousands of jobless men from city streets into rural relief camps, where they were set to hard labour for a paltry wage of 20 cents per day. It was an attempt to hide the problem of poverty rather than address it.

Even though the camp workers were technically banned from organizing, thousands of them joined the newly-formed Relief Camp Workers’ Union (RCWU). The group — which was affiliated with the Communist Party’s trade union, the Workers’ Unity League (WUL) — decided that one dramatic move would draw attention to their cause: a general strike. On April 4, camp workers from all across Western Canada walked off the job.

Two thousand men converged on Vancouver. They would spend the next two months protesting in the city.

At the time, Canadian politics was splintered. British Columbia’s Liberal government, which had campaigned on promises of “Work and Wages,” was at odds with the Conservative federal government under R.B. “Iron Heel” Bennett. He contended that policing and aid were local responsibilities. The lack of any cohesive and productive action by the government garnered only frustration from its citizenry. When the men arrived in Vancouver, public support was in their corner.

Less than three weeks after the strike started, Vancouver Mayor Gerry McGeer — who had was on a law and order platform — decided that enough was enough. After a large workers’ demonstration on April 23, McGeer read the Riot Act in Victory Square. Later that night, he would have police raid the workers’ headquarters. A violent street battle broke out. Arrests were made.

By June, after months of demonstrations, the protestors were frustrated. They had reached an impasse with the local government, and there was no clear path forward. The men decided they needed to chart a bold, new path, so they decided to take the fight to Ottawa. A grand exodus ensued. On June 3, one thousand men hitched rides on freight cars — a practice called “riding the rod” — to confront the prime minister himself.

At least, that was the plan. Halfway to Ottawa, the strikers stopped in Regina, with only the movement’s leaders carrying on. When they did meet with Bennett, the conversation quickly devolved into insults, and no resolution was found.

The strike leaders returned to Regina with a new plan. They spread the word: On July 1, Dominion Day, there would be a rally in the city’s Market Square. But local authorities found out and devised their own scheme. They wanted to prevent the movement from growing larger than it already was.

On the day of the rally, somewhere between 1,500 and 2,000 people had convened in the square when the RCMP riot squad arrived, armed with clubs. They forcibly shut down the protest in what would become the most violent conflagration of the Great Depression: the Regina Riot. By the end of the day, one constable and one protestor had died. More than a hundred people, mostly locals, were injured. Meanwhile, the movement’s leaders had been arrested, screeching their campaign to a halt.

While Bennett and his law enforcement might have won the battle, he didn’t win the war. Or rather, he didn’t win the election. A few months later, the Conservatives lost power, sunk by the public’s distaste for Bennett’s repressive tactics.

Unfortunately, a change of the guard didn’t result in a swift economic turnaround. There would be more hard days to come in British Columbia and across Canada.

3. Mickleburgh, Rod. On the Line: a History of the British Columbia Labour Movement. Harbour Publishing, 2018.

4. “On to Ottawa Trek.” On to Ottawa Historical Society, BC Labour Heritage Centre, 2002, www.labourheritagecentre.ca/wp-content/uploads/2018/08/Booklet-On-to-Ottawa-web.pdf.