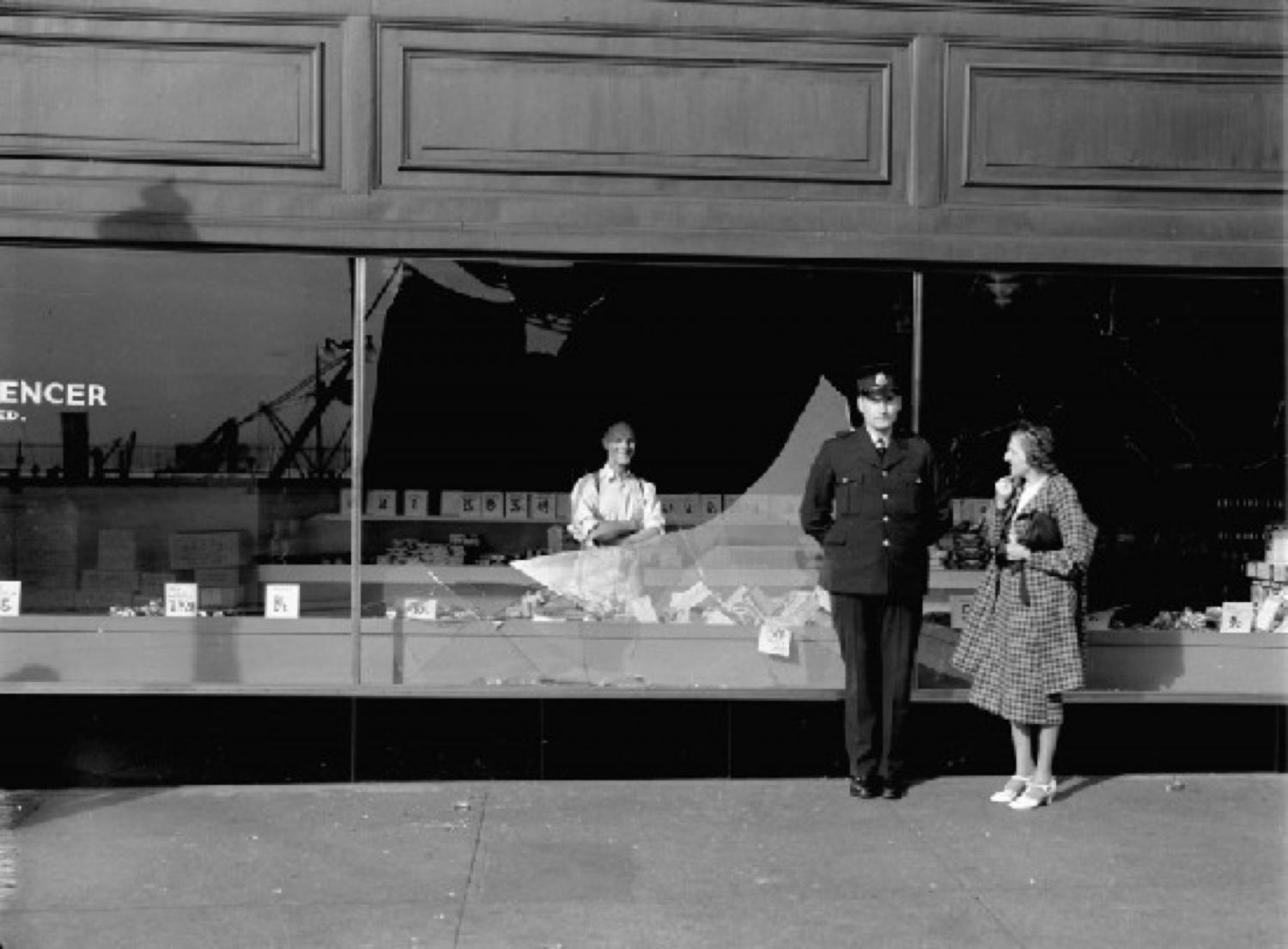 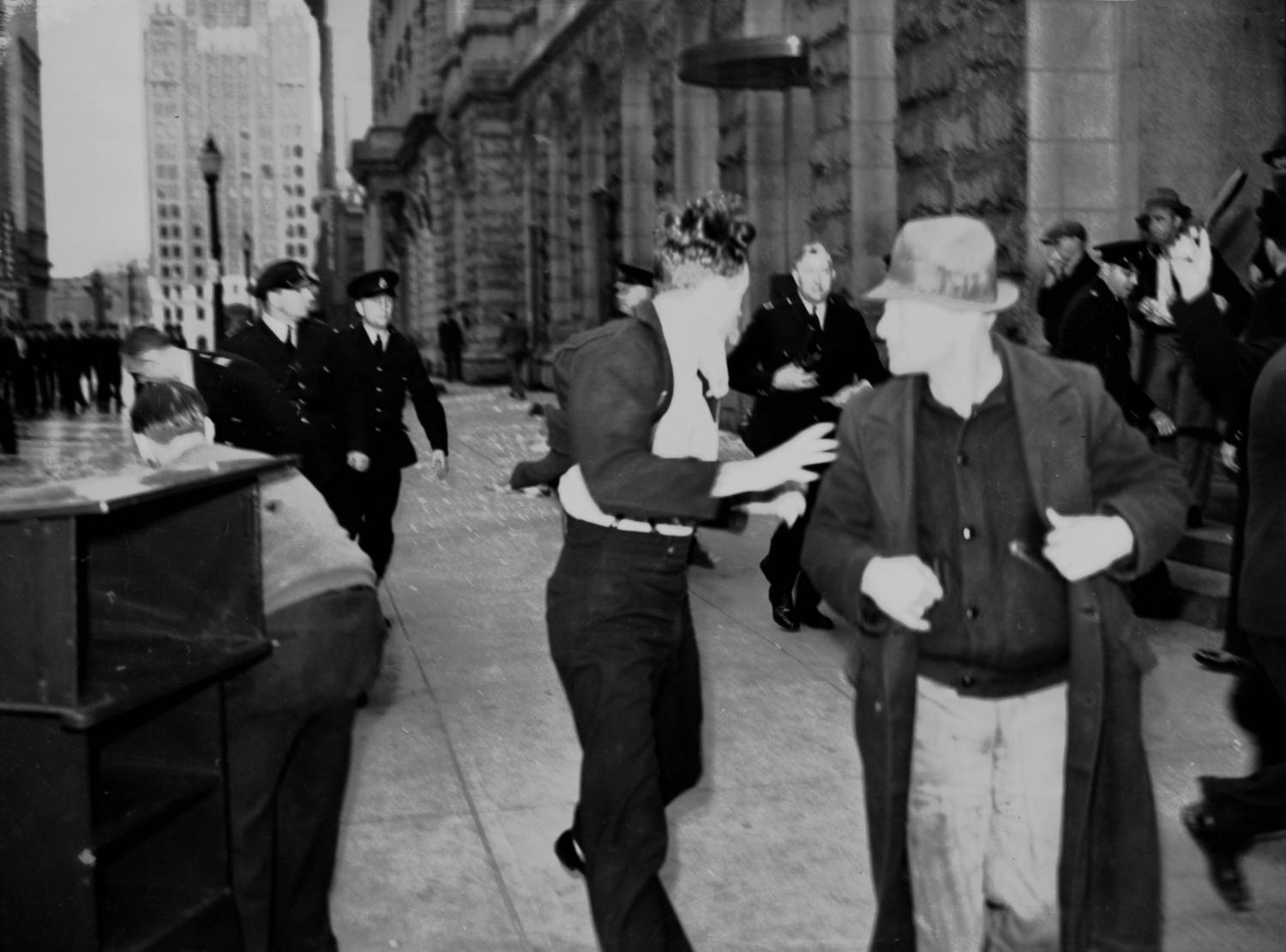 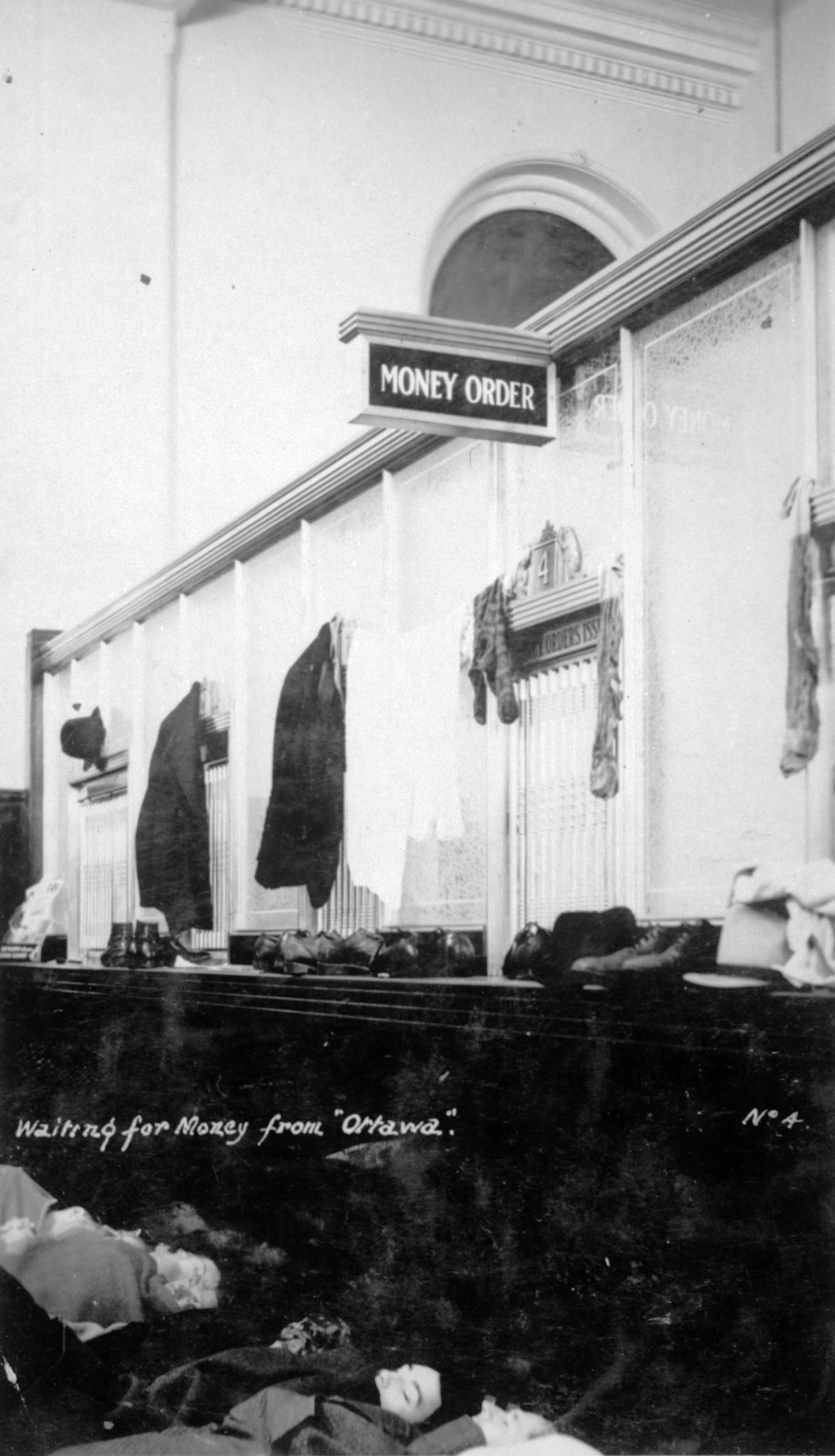 “Sitdowners” sleep in the post office during the month-long protest. Their clothes and shoes decorate the money-order desk. 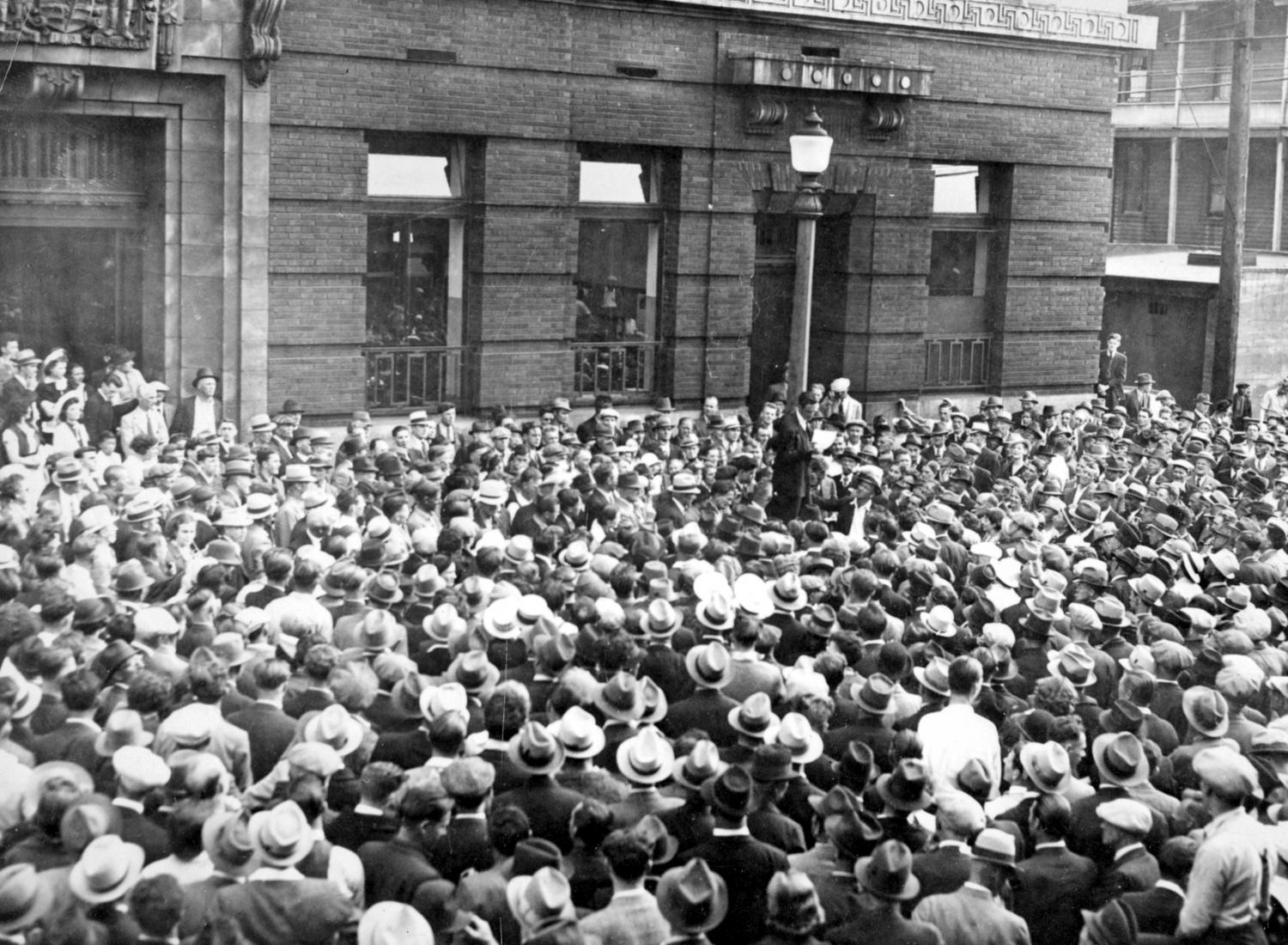 Demonstrators outside the police station in Vancouver. Nearly 2,000 gathered to demand the release of arrested protesters. 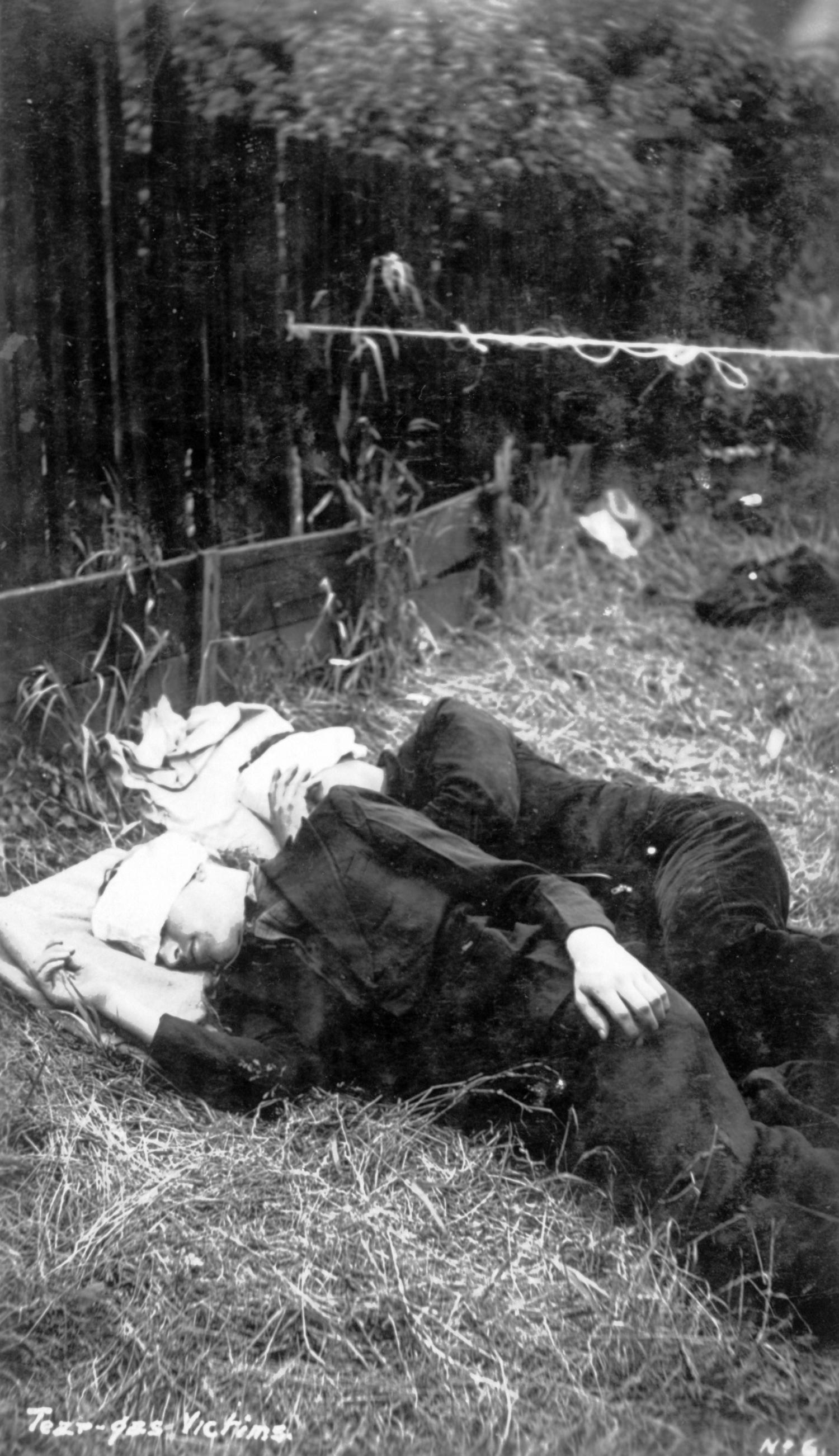 “Sitdowners” sleep in the post office during the month-long protest. Their clothes and shoes decorate the money-order desk.

Demonstrators outside the police station in Vancouver. Nearly 2,000 gathered to demand the release of arrested protesters.

In the early hours of June 19, 1938, the quiet in Vancouver was suddenly — and violently — disrupted when members of the Vancouver Police Department and the RCMP stormed the city’s post office with tear gas and truncheons. Unemployed men had set up camp in the building, today the Sinclair Centre, for a protest that had lasted a month. Now, the patience of law enforcement had worn thin.

Many were injured and sent to the hospital. Steve Brodie, a communist and well-known labour activist, was beaten by five different policemen. His bludgeoning was only cut short when officers noticed a nearby reporter with a camera.

The clash quickly spilled onto the street. Police chased the strikers and their supporters down Hastings and Cordova, leaving a trail of smashed windows.

What would later be known as “Bloody Sunday” was a dramatic moment in a decade marked by unrest. By this time, years into the Great Depression, skirmishes between the people and the police were nothing new. High unemployment, an unsympathetic government, and an overwhelming air of dissatisfaction hovered over cities across Canada. In 1938, the government announced it was shutting down the notorious relief camps it had established to occupy thousands of the country’s jobless men. Their closure forced many back onto city streets, once again homeless and unemployed.

Brodie himself had worked at the camps. In 1935, he took part in the On-to-Ottawa Trek and Regina Riot, fighting for better pay and work conditions. Now, he was organizing the post office strike, part of a larger, citywide strike that started on May 20. In total, 1,200 men split themselves between the post office and the Vancouver Art Gallery. The Georgia Hotel was also briefly occupied; however, not wanting to risk damaged property, hotel staff paid the protestors $500 to leave.

The bulk of the demonstrators, around 800 of them, went to the post office.

Upon arrival, the men asked to be arrested, but the police refused. So they settled into their new home, not interfering with the daily work of sorting letters and distributing mail. They became known as the “sitdowners.” They even established their own newspaper and held a sports day, all the while receiving public donations collected by so-called “tincanners.”

It was a period of relative calm that lasted for a month. On June 19,  Vancouver police rounded up Brodie’s comrades at the art gallery without incident. But the violence led by the RCMP at the post office ignited an anger that had been simmering among Vancouver residents. Two thousand supporters surrounded the city's police department, pushing for the release of protestors who had been arrested. The police did not budge. Later, 10,000 people would congregate at the Powell Street Grounds — today’s Oppenheimer Park — to demonstrate against police brutality.

After nearly a decade of chronic economic instability, the frenzy of “Bloody Sunday” exposed how vulnerable Vancouver had become. But things were about to change; the conflict brewing across the Atlantic would mark the end of the Great Depression. Nevertheless, the seeds of activism and desire for reform had been planted and would crop up again throughout the century.

4. Mickleburgh, Rod. On the Line: a History of the British Columbia Labour Movement. Harbour Publishing, 2018.